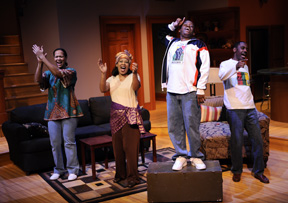 In Victory Gardens’ “Living Green,” the African-American Freemans have made all the right decisions at all the right times in their careers and in their choice of real estate. Now they are faced with a financial and ethical dilemma: do they sell their beloved family home and return to their old neighborhood and invest in its future?

The politics and economics of this Gloria Bond Clunie play are simplistic; the piece ignores the venality fueling the Freemans’ move. What’s the difference between “rising up” and reclaiming an old neighborhood (where better housing deals can be found) and causing the painful displacement of gentrification? The competent ensemble tries valiantly to bring sincerity to the often clever but sometimes tinny patter; Corey Marshaun Cantrell stands out as the gang-banger who puts the Freemans’ good will to the test. But good intentions alone can’t overcome the predictable plot and telegraphed twists. (Lisa Buscani)