by Andy Seifert
February 9, 2009Filed under: 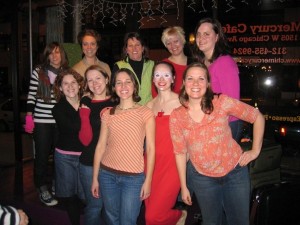 Based on personal observation, men tend to unfairly tag all-female comedy groups with a few predictable prejudiced stigmas. “Oh geez, here we go,” the narrow-minded male thinks. “Another overtly feminist, ceaselessly male-bashing act that focuses on periods, male chauvinism and pseudo-‘Vagina Monologues’ tangents.” Not so for The Kates, a collective of Chicago female comediennes, actresses and musicians, who may occasionally take a shot at the opposite sex, but refuses to make it their identity. Rather, The Kates just happen to be a particularly talented assortment of girls, a rotating cast featuring, among others, stand-ups Cameron Esposito, Kelsie Huff and Amy Sumpter. Occasional gender-specific humor comes up—being fondled by an 8th grader, magazines that ask “what’s he thinking about your orgasm face?”—but all in the natural course of observational humor or sprawling monologues, and as a result the whole production has an informal, almost campfire-storytelling feel. Big ups to Huff, whose hosting duties included bubbly, caffeinated-influenced introductions and doling out free cupcakes (!) with an infectious joyousness that makes you happy to be alive. (Andy Seifert)