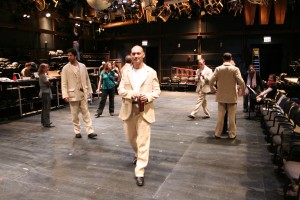 Relaxing backstage on a break between rehearsals, you barely have a chance to ask if the Lookingglass production of “Our Town” coming on the heels of the much-acclaimed David Cromer production that began at the Hypocrites last year and is opening next week in New York is a coincidence before co-directors Anna D. Shapiro, 2008 Tony Award winner for “August: Osage County,” and Jessica Thebus, both nod their heads in unison.

Shapiro offers that two productions so close together may only seem odd to “those of us who live and breathe theater rather than for ordinary people with a life who may like theater, but who probably have one theater that they principally go to.” Did either of them see the Hypocrites’ production? “Oh, sure,” says Thebus, “we went together. It was a beautiful production and very inspiring.” Did it confirm anything that the pair might—or might not—do in their own production? Long pause, broken by Shapiro: “Yes, and yes, though we would never tell you what those might be.” “Ditto,” shoots back Thebus. “Keep in mind,” says Shapiro, “we are all good friends. David and I went to school together back to high school and we cheer one another on. This is not competitive like sports: David texted the day we began rehearsals and wished us well, and I said, ‘Gee, it’s going so well, is it really this easy?’ and he’s like, ‘That’s the secret, it’s like singing “Danny Boy,” you really can’t screw it up.’”

Contrary to the notion that the pair are bringing “new life to an old chestnut,” Shapiro and Thebus say they have always been fascinated with “Our Town,” ever since they first read it back in high school. “I never thought this was anything less than a great play,” says Shapiro. “Even seeing a high-school production reduces me to crippled weeping. I have been trying to get my students to direct it forever, but they didn’t know how great it is. Now, they are all going to want to do it.” “It is iconic,” agrees Thebus, “like the Bible or Shakespeare.”

So why do “Our Town” at Lookingglass and not Steppenwolf, where Shapiro is ensemble member and where Thebus is artistic associate? “It’s not what people might think, namely that no one at Steppenwolf wanted to do it,” offers Shapiro. “The fact is, everyone wanted to do it, and there were three people with their hands up ahead of me who haven’t gotten it together yet, so it would be a long, long wait there. I’m not big enough.” Even with a shiny new Tony Award? “I’m not big enough physically,” Shapiro jokes.

And why do it together? “We are both huge devotees of the play,” says Shapiro, and both teach it at Northwestern and have always loved it. “We have a common vision,” says Thebus, Shapiro cutting in, “and mutual respect and friendship. Together, there is more dynamism and because there are two of us, everything is an external conversation, which is great. Usually, directing a show is a very solitary and lonely experience, but the chance to do this together makes this very special. We will probably write a book on the process of putting this together,  it has been that fascinating.”

“You read it one way when you’re very young,” muses Thebus, “but as you’re older, another layer of meaning emerges and you think, ‘Ah, that’s what that line means.’” “There is a power there, in coming back to something familiar from when we are young and revisiting it in a whole new way,” says Shapiro. “And here is this company [Lookingglass] that is now 20 years old and the folks all went to college together so are already a close community and all of us, including David [Cromer], are exactly the same age now and at the same point in the arc of our lives where life and death are on our minds and we are seeing that from the prism of this play.”

Does casting David Schwimmer of “Friends” fame as George Gibbs, though, carry a risk of pop-culture recognition, something akin to Daniel Radcliffe of “Harry Potter” fame doing “Equus”? “Let me tell you,” scolds Shapiro, “that kid [Radcliffe] was amazing. This is Chicago, and I think most people know, or should know, that David was a theater actor here long before television found him. We should all be so multi-talented.”

Shapiro’s own success with “August: Osage County,” which won her the 2008 Tony Award for Best Director and which is still running on Broadway and in London, and will begin a national tour in July, is no less impressive, but she feels that it is time to move on to other things. “The rhythm of the life of a theater director is such that you start a project and you end a project, but this keeps sprouting elsewhere,” Shapiro says. “Don’t get me wrong: I am enormously grateful for this association and for what this show has achieved and really do think that every actor involved with it should get a house and a car. But it is tough to keep coming back again and again to the rehearsal room and refresh the show and I’ve had my say with it.  If I wanted a Starbucks franchise, I’d have bought a Starbucks franchise.”