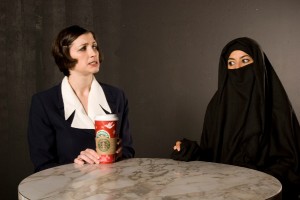 Raven Theatre’s “Misamerica,” explores American business’ efforts to exploit the chaos in the Middle East. Even in hell, there’s a buck to be made.

Toward the end, Gina and a government representative assess the complexities of the conflict. More of that tone would have provided a great counterpoint. Instead, the audience is left with the madness of our actions, which are funny and not funny at all. (Lisa Buscani)