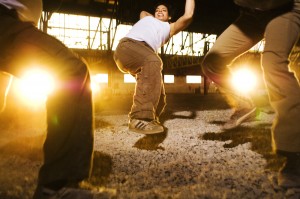 "Whiff of Anarchy"/Photo by Dan Merlo

Over the last eight years, The Seldoms have quietly built a reputation for creating astute, inquisitive dances that engage the surrounding world both physically and intellectually. This weekend, The Seldoms premiere three new works by three choreographers at the Dance Center of Columbia College. Artistic Director Carrie Hanson discusses her new piece, a duet entitled “Thrift.”

In your description of “Thrift,” you mention the multiple meanings of the term economy and how they “sit in opposition.” Could you elaborate?

I talk about economy a lot in my classes—in reference to approach to work, moving away from muscular force. I focus on ways of moving expansively: with virtuosity, but not muscularly. I focus on moving with intent, from the skeleton—that’s something I’ve been interested in ten years. Toward simplicity. That simplicity feels very much in contrast to what’s happening with the economy. I think most people on the street don’t understand the mechanisms of what led to the current situation because it’s all so complex. When you listen to the weekend news programs, the experts say that some people saw this coming, but no one was connecting the dots, or people weren’t listening to those who were. The sense is that someone wasn’t doing his or her job. I by no means believe this short dance (it’s only ten minutes) covers this topic exhaustively—it could easily fill an evening.

The subject of simplification and frugality brings to mind the piece you choreographed last year, “Monument,” which addressed excessive consumption and waste. Did you find these two pieces speaking to each other at all?

I didn’t approach this as a continuation of the topics in “Monument,” but I see connections between the two of them. I wonder if this just comes from my own interest in…in how we lead our lives. And consumption is such a part of the American way of life. Because of my income and lifestyle, I can’t participate in a whole lot of consumption, but I think about this all the time: what can I have? What can I afford? What drives my idea about what I want to have?

Can you tell me a little about the partnership with Paige Cunningham?

Paige and I come from very different movement backgrounds. She has a lot of classical ballet training. She danced with Merce Cunningham (no relation), so she has a very different approach to form and attack that I don’t have. I come from release-based technique…I move very passively. We move in unison quite a lot in this piece; some of my peers have watched it and said “you move differently and have to find common ground,” and some found the contrast interesting. I choreographed a piece on Paige a while ago, and she’s wonderful to work with; she’s so incredibly disciplined.

There’s an afterparty and fashion show after the Saturday performance. Is this tied directly to the costuming in 3×3?

All the designers in the fashion show were involved with the performance. I wanted to feature their work in a different form, along with the work they do for themselves. This is the first time Anke [Loh, Art Institute professor and designer for “Thrift”] has made something for The Seldoms. She’s very exacting. She’s interested in atypical beauty and low-glam, which is fine with me; I’ve been trained to work against the notion of costume—which has such theatrical references—and more toward garment. I’ve always been interested in beauty. Maybe I want to work with fashion designers because of things I desire, wanting more clothes myself.

Would you like to talk a little about the other two pieces in 3×3: “Whiff of Anarchy” by Darrell Jones and “Triggers” by Liz Burritt?

Well, I’m in “Whiff of Anarchy.” Darrell is an exceptional person and a true artist. He’s so embodied; he uses his own physicality as resource. To be in the same studio with him—not while he’s generating choreography, but while he’s generating images—he’s tremendously resourceful at that. He brought in videos of riots and images of conflicts and protest, so we were surrounded with rich source material. It was a lengthy and deep process. Liz is incredible, wonderful to work with. I wasn’t directly involved with “Triggers,” but Liz works with text, voice and song; the cast gets to do some singing. It was a great period of growth for the dancers.