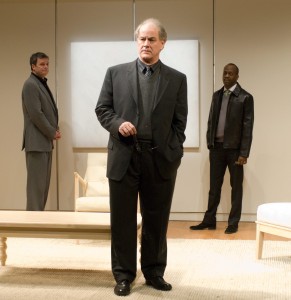 “Does anyone here know anything about art?” protested a solitary voice in a post-show discussion of “Art;” the poor guy was understandably confused since this was a show called “Art,” and yet the discussion centered on relationships in the play. “As an artist,” he went on to say, “I was curious why the playwright would choose a painting style that you can actually commonly see in the art world.” He is right, of course, and we went on to have our own conversation afterwards about Jasper Johns and his all “white” paintings, including his own all-white rendition of his iconic American flag collage. Perhaps a white canvas with no paint, or with merely a single splotch of white paint in the center?

“It’s not a play about art, it’s a play about friendships,” offered the moderator. True. Friendships viewed through the prism of attitudes about art. But “Art” could just as easily be X or Y, which is the brilliance of this play and why it still works so well that it has been translated from its original French to over thirty languages. But it does help to know that Yasmina Reza’s play originated in France where art is taken so seriously that everything from the best of the Louvre to Jerry Lewis movies are considered “art.”

The painting in question is a 4 x 5 canvas of diagonal white stripes on a white background that a dermatologist has bought for 200,000 francs. His visiting friend laughs and calls it “a white piece of shit” and feels that his friend has been had and couldn’t possibly be “moved” by such a painting. Another mutual friend has separate discussions with both friends where individually, he seems to agree with each of them, although his accommodating attitude is confronted head-on when the three meet together.

Aside from the comic dialogue that is delivered with fervor here by three Steppenwolf ensemble members K. Todd Freeman and Francis Guinan, along with and John Procaccino, directed by ensemble member Rick Snyder—who have known and worked with each other often enough that playing friends is hardly a stretch, the way that the characters’ lives each unfold through their art attitudes is fascinating but also, their view of strictness and freedom, so paramount as to how we view art or life itself. Those of us who have liberal attitudes about art, such as Serge, will often be extremely dogmatic on something far less abstract; in this case, Serge goes ballistic when one of the friends is detained and comes a few minutes late. The “rules” of art can be easily shattered and still be appreciated by Serge, but apparently not the hands of a clock. Likewise, Yvan, the peacemaker and middle-man, finds that he is so accommodating that he is about to marry someone who has already completely taken over his life in ways that he is befuddled to comprehend: not making a decision can be a form of making a decision by allowing someone else to make it for us. And Marc, the onetime mentor to Serge, who is really most offended that his friend would make such an expensive purchase without his consultation, is gradually coming to terms with the fact that a mentor, like a parent, has to “let go” or else becomes a co-dependent. The play is a powerful and entertaining reminder that when a friend attacks our “taste,” our politics, our ideas on just about anything, much more is at stake and we get a rare and potentially illuminating glimpse of ourselves as we present ourselves to the outside world and as others see us. (Dennis Polkow)