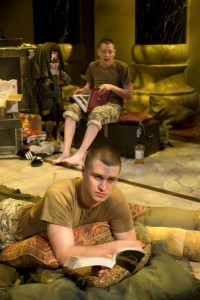 “Oh, you’re going to that patriotic baseball show,” said a colleague when I mentioned I was heading out to Writers Theater for the world premiere of “Old Glory.” “Write one for the Gipper.” Yes, the confusion was understandable, given that this show is being promoted with a picture of a baseball trophy and sports a title that is a traditional moniker for the American Flag. Of course, once you know that this is the latest from Chicago playwright Brett Neveu, that clues you in that there is more here than meets the eye. Much more.

A war play, family story and crime mystery all rolled into one, Neveu unfolds his carefully constructed narrative one flap of a flag at a time amongst three pairs of characters who are coming at the death of a soldier from different vantage points: a father cornering his dead son’s commanding officer in a bar, a mother interacting with her dead son’s best friend, and two soldiers from different worlds, both geographically and psychologically, constantly confronting each other as much if not more than the enemy.

Yes, this is the Iraqi war, but what is so haunting about this show is that it could virtually word for word have come from the Vietnam War era when I witnessed firsthand virtually identical dialogue encountered here. And by showing the effect of a solitary soldier’s death both on the battlefield as well as on the homefront, the ethos of war is etymologically examined in a profound way by having the audience share in the pain and loss of all involved. On another level entirely, the show is a mystery where puzzle pieces are revealed one at a time, the audience coming to cathartic epiphanies along with the characters.

As you would expect from Writers Theatre, the ensemble acting is absolutely first-rate, and under William Brown’s direction, your heart will pound and then break during some of these emotional confrontations of helplessness in the face of utter destruction and seemingly senseless loss; some go through the motions of life trying to move on until they fall apart, others are simply so numbed by the shock that they drown themselves in beer. The soldiers retreat to their tent, anxious to remove the horrific images of the dead count of the day with drug-laced liquor and by pretending they are comic-book action heroes.

Aside from how compellingly and refreshingly Neveau unspools his yarn—the entire show is a relentlessly streamlined ninety minutes with no intermission—he resists the temptation to make this a political period piece with discussions of the pros and cons of why America went to Iraq in the first place: this is a show about trying to pick up the pieces for all of us now that we as a country have made that journey, for better or worse. (Dennis Polkow)