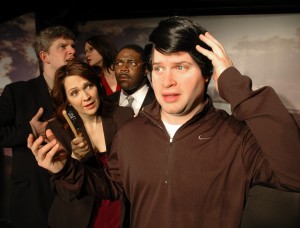 So last week Rod Blagojevich went on the radio and slammed Illinois legislators as a bunch of losers and lechers, sparking this hilarious headline on Chicagoist.com: “Bitter Blagojevich Drinks Springfield Haterade.”

The timing was perfect—coming just one day after Second City opened “Rod Blagojevich Superstar.” Seriously, does Blago have a financial interest in the show? He’s doing one hell of a job marketing this ode to his idiocy. Because yes, he’s a lowlife egomaniac and the human equivalent of the herpes virus. And yet his continued delusions and obsessive media whoring, it’s kind of golden, no?

National late-nighters hit paydirt with the guy—the coif is a punch line all its own; big ups to “Daily Show” for “Scumdog Million-Hairs”—but Second City’s “Rod Blagojevich Superstar” is the first major flaying of the ousted governor by (and for) the people who actually voted him into office.

Revenge is a dish best served cold, but comedy is best served fast and reckless, and director Matt Hovde understands this in a big way. Jokes about political backroom bullshit fly faster than Blago’s thicket of bangs on a gust of lakefront wind, and somehow it all feels right.

As portrayed by Joey Bland in a black turtleneck and super-deluxe luxuriant wig, Blagojevich is a blissed-out douchebag ignoramus convinced of his own messianic powers. (Actually, Bland looks a little like Sean Hannity under all that hair, and I would argue that, despite their opposing political leanings, they actually have more in common than you’d think.)

In this skewering of all things Rod (and a few things Burris), “Jesus Christ Superstar” was an inspired choice to parody. When Lori McClain’s ball-busting Patti Blagojevich belts out, “I don’t know how to fucking love him,” it’s like some kind of musical theater karmic justice is being handed down on a silver platter. McClain’s performance really got me—the look on her face suggests Patti is a gal who sees life as one long bar fight. Oh Patti. (Nina Metz)