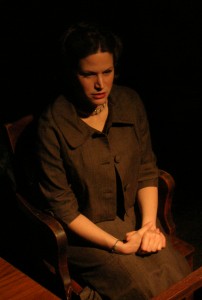 Playwright Lillian Hellman lived a life that required three memoirs to contain it. Her final volume, “Scoundrel Time,” covered the difficult years of her blacklisting in Hollywood and her testimony before the House Un-American Activities Committee during the height of the Communist witch-hunt. In bringing this memoir to the stage, adaptor Terry McCabe makes a bold choice: rather than creating a one-woman show in an extended monologue, or expanding it into a fully staged play full of actors, he economically wraps the many bold-faced names that inhabited her world into the single character of “The Memoir.” That character is then used to interject bits into the monologue—like a staging of the congressional testimony—that expand the theatricality of the work. In the hands of the wrong director and actor, this might result in utter confusion. But Adrianne Cury’s direction is spot-on and Jerry Bloom plays the crazy quilt of roles that make up The Memoir with admirable agility: one minute he’s Hellman’s longtime lover, Dashiell Hammett, another he’s Clifford Odets, then he’s an Italian shopkeeper and a second later an Irishman. It’s a dazzling performance that hops from character to character and accent to accent with assurance. As The Memoirist, Sheila Willis inhabits Hellman physically, from her hair and dress to her assured stage manner. Her Hellman is not a woman of great subtlety or even emotion, but one of ample conviction, especially in herself. Willis plays Hellman as a plainspoken straight shooter, courageous but not romantic. Ironically, many believe that Hellman set the model for the mendacious memoir. Either way, she convinced me: lights up and I wanted more. (Brian Hieggelke)