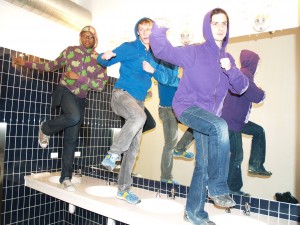 I must admit, I went into About Face’s production of  “Stupid Kids” with very high expectations and knowing it would be hard to meet my standards.  I read John C. Russell’s play in high school and it stuck to me.  As a young gay kid from Alabama coming to terms with my sexuality, the show’s stylized pining and frenzy of bad poetry was the answer to my classmates’ “90210” and “Dawson’s Creek.” What co-directors Bonnie Metzgar and Megan Carney gave me was a multimedia, teen angsty, dancing ball of kinetic energy that churns up those gloriously provocative and vomit-inducing memories of high school.  I loved it. The story is of a gay kid that goes by the name Neechee, played balls to the wall by Patrick Andrews.  Neechee has a hard on for Jim (Tony Clarno), the new guy in town with a major attitude and a motorcycle.  Neechee’s best friend is Erin Neal’s Kim, a Patti Smith-obsessed revolutionary with a crush on Judy (Whitney White), an A-lister with a totally rad wardrobe.  Jim and Judy are going out and Neechee and Kim are determined to break them up through a 1980s rollercoaster of self-discovery, first kisses and killer bongs.  It’s way complicated, way hilarious and way too close to home.  And taking a big risk, Metzgar and Carney have added a contemporary cast of high schoolers using text messages and video diaries to offer a counterpoint to the insane proceedings.  Though it took me a bit to buy into this shadow cast, I came out feeling like its use made the show relevant to an entirely new generation.  For that I’m grateful. I hope this show hangs around. (William Scott)