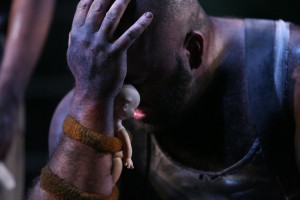 Eugene O’Neill’s expressionist nightmare of proletariat anger in America, astutely updated by director Sean Graney and the Hypocrites. Chris Sullivan gives a fervent, monumental performance as Yank, a coal-shoveling hulk aboard a steamship whose self-consciousness is first expressed in tirades about his adamant control over the world: “Hell in de stokehole? Sure! It takes a man to work in hell. Hell, sure, dat’s my fav’rite climate. I eat it up! I get fat on it! It’s me makes it hot! It’s me makes it roar! It’s me makes it move! Sure, on’y for me everyting stops. It all goes dead, get me?” After the daughter of a steel industrialist visits the engine room and, horrified, calls Yank a “filthy beast,” he struggles violently and increasingly articulately against his role in society back on land, through a series of highly stylized, feverish scenes pitching him against various institutions that would ignore or reject him. The streak of genius of this production lies in the role of cultural relocations and abstractions presented in each scene, from scatting prisoners writhing like snakes around Yank in a claustrophobic jail cell to 5th Avenue socialites leaving church reimagined as disco-goers; in stark contrast Yank stumbles, the epitome of cruel realism, marking in no uncertain terms the theater and audience as a place of privilege and fantasy. The final chilling scene, in which Yank confronts a silent ape at the zoo, actually draws shudders. Technically spectacular lighting, sound and, especially, set—based around a three-story ship’s cross-section that offers as beautiful an embodiment of social strata I’ve seen—further inform and modernize the truly avant-garde production. (Monica Westin)