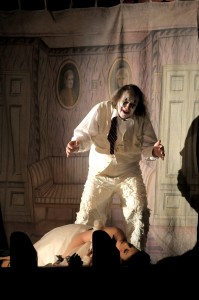 The revolution of Richard Wagner was such that even Italy, the birthplace of opera, could not escape his influence: even the elderly Verdi applied Wagnerian ideals in his final—and many think his greatest—operas, “Otello” and “Falstaff.” How could Italy reclaim operatic relevance in the aftermath of Wagner? One such attempt was verismo opera, an attempt to portray the seedier side of Italian peasant life in more realistic terms, the trajectory of which can be seen in our own time in films of Francis Ford Coppola and Martin Scorsese. Although the movement lasted well into the twentieth century and some even consider Puccini an exponent of the form, his was a post-Romantic attempt to recapture the glory of Verdi via the prism of Wagner. Verismo opera, as it turned out, gave us two enduring one-act works—“one-hit wonders,” to coin a phrase—which are routinely presented as a double bill: Mascagni’s “Cavalleria Rusticana” and Leoncavallo’s “Pagliacci.”

“Pagliacci” was the first complete opera ever to be recorded; its signature aria made Enrico Caruso the first international recording star more than a century ago and was the first disc to sell over a million copies. Even today, the image of a crying clown singing his heart out epitomizes the very essence of opera in the popular imagination. Caruso brought his own approach to verismo which is still the gold standard, a more beautiful sound than was originally the case in a style that placed singing at the service of the drama. By that standard, Russian tenor Vladimir Galouzine is the ideal Canio in that his is not a beautiful sound, but the intensity of his jealousy is so genuinely hair-raising that you almost start to feel sorry for his cheating wife and boyfriend who feel his wrath. No less pivotal is baritone Mark Delavan as the lame clown Tonio who delivers the Prologue with punch and pathos and breaks your heart when he is spurned by Nedda (Ana Maria Martinez).

“Cavalleria,” by contrast, never quite gets off the ground as its lovers are unable to generate sparks between them. Guang Yang sings beautifully, but her acting is wooden and Mark Delavan’s Alfio becomes the most interesting character by default. Dolora Zajick and Vincenzo La Scola will assume the lead roles in March which should help give this production a lift.

Italian conductor Renato Palumbo brings a most welcome Italianate sound to the Lyric Opera Orchestra not heard since music director emeritus Bruno Bartoletti’s departure from the company and Donald Nally gets a gorgeous sound from the Lyric Opera Chorus, especially in the “Easter Hymn” from “Cavalleria.” (Dennis Polkow)