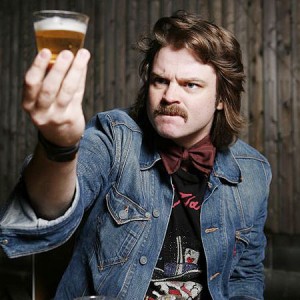 Dirty jeans, an Iron Maiden t-shirt, a Jason Lee-esque mustache–comedian Glenn Wool may be from Canada, but he kinda looks likes a hillbilly, the type that makes fashion decisions based on Hulk Hogan’s wardrobe and drinks PBR for the smooth, full flavor. Slightly slurring through a truly bizarre set list of topics—“superhero drinking,” dinosaur deities and gaining entrance into “Jewish heaven”–Wool reasons and speaks like another lovable oaf, Chris Farley. And Wool doesn’t shy from opinion (often shouting such opinions with the passion of an angry Steve Zahn), making simple, silly commentary on social and political issues, with Al-Qaeda as comedic target #1. “Hate the West? I don’t get that. How primitive is your hate that it requires a flat earth?” he asks. “Al-Qaeda’s gonna learn, man. Once China gets in charge, you’ve got to treat your religion like it’s an illegal drug. ‘OK son, I’m gonna drop some coins towards Mecca, you pick em’ up and pray really hard and I’ll watch for cops.’” (Andy Seifert)