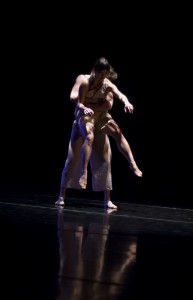 Shirley Mordine founded her Chicago-based contemporary dance company during the height of postmodernism. This year, that same company turns 40, begging the question of what “contemporary” means for a culture now exiting (for want of a better term) post-postmodernism, a culture still struggling to encapsulate the last two-score years. Mordine & Company plucks at the tenuous line between past and future with a world premiere, “Illuminations,” inspired by the tension between—appropriately for the times—“memory and hope.” In a video interview, Mordine states her insatiable curiosity and forward momentum, but there are plenty of affectionate glances back on the anniversary program this weekend too. Mordine & Co alum—a few of whom have gone on to establish prescient movement companies of their own—will join to perform hallmark pieces of Mo&Co repertory from the last three decades. Margi Cole’s Dance COLEctive will perform the 1975 piece “Three Women”; Same Planet Different World stages “I haven’t heard from you…” from 2003; and the company, along with guest alumni, will present a revamp of “Songspiel,” originally choreographed in 1980 and set to the deliciously wicked music of Kurt Weill. The Saturday night gala performance additionally features Mordine performing her 1981 solo “Silver Lining.” (Sharon Hoyer)