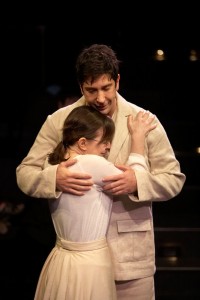 Lookingglass Theatre’s revival of “Our Town” has its touching moments, some fine acting and has been sensitively directed by Anna D. Shapiro and Jessica Thebus, so along with the fact that a recognizable “name” (David Schwimmer) is in the cast who will undoubtedly sell tickets, I guess Lookingglass has an easy hit on their hands. But the production is so lacking in theatrical vigor, emotional involvement or intellectual stimulation that I left the theater wondering if Thornton Wilder’s 70-year old drama has dated badly, was overrated to start with or failed to move me because it doesn’t speak to my personal life experience. I’m pretty sure my ambivalence is the result of all three. Indeed, this is the kind of evening you describe in annoyingly equivocal statements: it’s not bad, but it’s not that good; it isn’t boring, but it isn’t exciting either.

“Our Town,” of course, is Wilder’s sentimental look at small-town American life in the fictional village of Grover’s Corners (population 2,600) at the turn of the twentieth century. The play spans thirteen years over three acts but is so dramatically inert that all the action blends together into one seemingly continuous day in the life of the Gibbs (the town doctor, his wife and their children) and the Webbs (the town newspaper editor, his wife and their children). They live the kind of lives where wives gossip over the stringing of beans and a trip to the battlegrounds of the Civil War counts as a holiday vacation. Nobody has to worry about AIDS, bad credit scores, job security or mushrooming mortgage payments. Instead, their hearts are captured by nature (birds; the changing of seasons), their minds molded by the non-threatening literature of “Robinson Crusoe” and the Bible. To say that life depicted in “Our Town” is dull and conservative is an understatement: Thornton Wilder makes Chekhov look like Joe Orton, and Grover’s Corners makes Lake Wobegon look like Sodom and Gomorrah.

It isn’t until the final act that “Our Town” delves into darker waters, when Emily Webb (Laura Eason), whose courtship with and marriage to George Gibbs (Schwimmer) has been charted in the first two acts, dies in childbirth and returns from the dead to pronounce that life’s too short and that humans take the little things for granted. “There’s something way down deep about every human being that’s eternal,” ponderously proclaims the stage manger (Joey Slotnick). And in case the message doesn’t immediately register, Janice Pytel’s cream-colored neutral outfits—linen suits for the men; blouses and skirts for the women—have by this point adopted an anachronistic splash of modern dress (jeans; khakis) or a black-colored piece of clothing to drive home this play’s universal and grim sentiment.

If this revival had found a greater purpose than as a nostalgic trip down an exclusive memory lane, or become something other than the theatrical equivalent of comfort food, I may have bought into it. If it had found an invigorating way to present an old war horse, I probably would have swallowed it hook, line and sinker. (Compare this revival to Sean Graney and the Hypocrites’ take on Eugene O’ Neill’s “The Hairy Ape” at the Goodman—problematic, but at least a risky endeavor attempting to make a statement of modern times via a classic text.) About the only nostalgia I experienced was when scenic designer John Musial’s imaginative set was in full flourish: hundreds of feet of Christmas lights strewn in and around the lighting instruments and bric-a-brac of everyday life (furniture, miniature houses, the moon), suspended high above the empty playing space and suggesting a heavenly cosmos of twinkling lights. It reminded me of John Napier’s celestial junkyard of a set for the musical “Cats,” had that design been turned upside down and hung from the roof.

And yet. The play’s durability proves that the piece speaks to millions of Americans on some level. On opening night, it clearly spoke to the middle-aged couple who were clasping hands like high-school sweethearts during George and Emily’s courtship scene over an ice cream soda. And it obviously spoke to the beaming single father of two young daughters in the front row, whose loving and protective embrace seemed to intensify as the show progressed. Maybe for them, “Our Town” is their town. For me, sitting through this play was like being stuck at the Cracker Barrel for two hours with a bunch of boring Republicans. (Fabrizio O. Almeida)