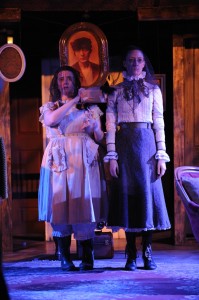 The Strange Tree Group’s current production of Emily Schwartz’s “The Dastardly Ficus and other Comedic Tales of Woe and Misery” has been getting a lot of buzz within theater circles and there is a clear reason.  This artfully constructed gem, directed by Amanda Berg Wilson, is the kind that you want to take home in your pocket so you can get a closer look whenever its macabre imagery pops in your head, which will be often.  Everything I love about Edward Gorey, Roald Dahl, and any fairy tales with wicked stepsisters or spinster aunts is currently living warmly in the basement of the Chopin Theater, nestled in the lovely scenic work of Kate Nawrocki and the playwright.  The story is that of the Derbyshire sisters, Geneva (Carol Enoch), the buttoned-up matriarch and Jennifer (Nancy Freidrich), the disheveled free spirit who would rather be bogging for dead things than suffering under her sister’s conservatism.  The series of scenes in the first act sets up a codependent, dysfunctional family relationship that comes to a whirling cacophony when Jennifer invites home a gentlemen suitor for Geneva in the second act. What makes “The Dastardly Ficus” so fun is the talent of these two women.  Enoch can stare daggers through a coffee table and elicit fear from a potted plant while Freidrich is devilishly childlike in a way that leaves the most delicious taste in your mouth.  This production is a special engagement of the show that started the company five years ago and I’m left with one big question.  Where is the sequel?  These characters have way more life in them. (William Scott)