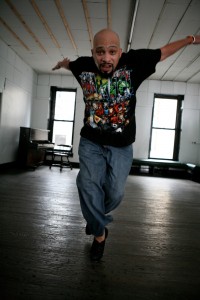 Each winter, the Chicago Human Rhythm Project hosts a festival of hoofing—a weekend of workshops, master classes, youth scholarship auditions and, customarily, performances by local and national greats. This year, in lieu of live performances, the Winter Tap JAMboree will feature a Saturday night screening of documentary film “The Wonder Kids,” the story of a small tap school that served as safe haven and muse to at-risk kids in inner city LA. Tap legends Savion Glover and Debbie Allen along with Dick Van Dyke (an old hoofer himself) appear in the film, bearing witness to the good works of Paul and Arlene Kennedy—the founders of the school who are credited with saving the lives of thousands of kids throughout their career.

“This film brings home the urgency of reaching out to young people in rougher neighborhoods,” says CHRP director Lane Alexander. “There are schools in Chicago doing similar work in the African-American community: Mayfair Academy, the Sammy Dyer School on 72nd. We want to generate awareness in the community.”

The Winter Tap JAM is, first and foremost, the CHRP vehicle to identify and support promising young dancers across Chicago. Scholarships for the annual Rhythm World series of classes are awarded to kids between the ages of 12 and 18 on the basis of both talent and need; the result is a diverse group of teenage tappers who will spend one to two weeks of intensive study under the tutelage of some of the finest dancers in the field.

“The kids wind up working together, choreographing together, applying to college together,” says Alexander. “That’s the most rewarding part: to catch these kids in the ignition stage, when you can ignite their imagination and affect a whole life.”

The Sunday afternoon scholarship audition—dedicated to dancewear designer and arts patron Leo Harris—is open to the public; attendees will have the opportunity to vote for one $1000 scholarship recipient. If you’re planning to cast a vote, come early and don’t forget your shoes; intermediate through beyond-advanced classes with local masters, including Tap JAM director Tre Dumas, are held all day Saturday through Sunday morning. (Sharon Hoyer)