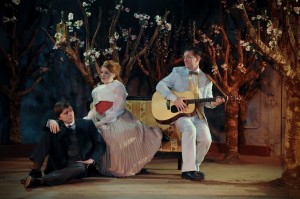 The first thing one notices are the cherry trees. Yes, I know it’s called “Cherry Orchard” but not every production of Chekhov’s final play will choose to visually illustrate the one thing that is keeping a gentrified family in fin de siècle Russia up all night, the reason why spendthrift matriarch Madame Ranevskaya, behind on her interest payments and in danger of foreclosure, refuses to cut her losses. Topical, anyone?

In director Kimberly Senior’s revival for Strawdog Theatre, the cherry trees line the back walls of the theater, cluster in the middle of the playing area and sport branches that encroach upon the performers who must gently navigate around them—sometimes at the expense of a fluid entrance or graceful exit. This can only be intentional, Senior having found in Anders Jacobsen’s cramped scenic design a visual metaphor for Chekhov’s inevitable finale in which the old guard, clinging on to their privileged lifestyles, are being forced out by social change. Topical, anyone?

It’s a respectable and intelligent read on the play, yet one I’m afraid that makes these self-centered characters more prone to laughter than love. After all, if there’s little sense of the beauty and inspiration that the cherry orchard imparts on these sentimental fools who refuse to leave it, they run the risk of coming across as just fools and not the flawed human beings deserving of our sympathies. It’s a challenge any director and designer would face staging this particular Chekhov in such an unforgiving and claustrophobic space like Strawdog’s, where bad sightlines even prevent key “what’s at stake” moments from fully registering (the first time Ranevskaya takes in the cherry orchard; her reaction to Trofimov’s entrance). As well, given that the trees never lose their visual predominance, there’s little distinction between the cluttered state of the estate in Act I, and Act IV, when everything has been lost and the family is surrounded by emptiness. An emotional element goes missing.

Alas, I’m cherry-picking my quibbles in a production that offers so much more, like great actors, Senior’s trademark emphasis on ensemble and a brisk pace that sees this “Cherry Orchard” clock in at around two hours with intermission. As Ranevskaya, Jennifer Avery, whose Natasha in “Three Sisters” remains for me one of two definitive interpreters of that role, drops hints of knowing awareness even as she builds a fragile façade of smiley-faced indifference. She’s still much too young for the role, but by the end appeared to have aged right before my eyes. As her sometime nemesis/admirer Lopakin, Jamie Vann’s obsequious turn makes you realize this onetime son of a peasant never lost his servant mentality and desire to fit in, but he needs to hint more at the conniving social climber within to pull off his third act coup of class revenge. Curt Columbus’ translation—colloquial and comic—emphasizes the laughs and appropriately suits Senior’s light and comic touch. But I missed the perfect balance of tragedy and comedy that characterized her sublime “Three Sisters” three years ago. Let’s hope it’s not another three before her next visit to the doctor. (Fabrizio O. Almeida)