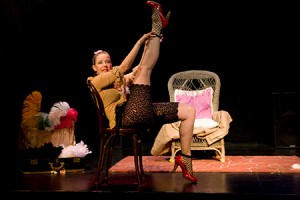 Dali’s “Dream of Venus.” The Dust Bowl. Daniel Day-Lewis. 80-year-old former showgirls turned bar owners who still bring the geriatric men to their knees. The speculated life of a mysterious neighbor lady who dies alone in her bramble-covered shack. The people, places, ghosts and gamines that find their way into Heather Woodbury’s newest work, “Last Days of Desmond Nani Reese,” come from every nook and cranny; lifelong memories and imagined realities, history books and contemporary cinema—the then, the now, the what will come.  A tale of two women from very different worlds—a feminist scholar on a research trip and the aged stripper  she’s traveled across the country to interview—“Last Days” marks a departure in form for the critically acclaimed writer/performer. For nearly thirty years, Woodbury has been crafting epic solo plays, including “Whatever,” the 100-character, eight-night episode “performance novel” that was featured on “This American Life” and published by Faber & Faber; or the six-act saga about the Brooklyn Dodgers move to Los Angeles, “Tale of 2 Cities,” which began as a solo show, was transformed into a multi-actor play, and then nabbed an Obie for ensemble performance. But in this latest piece, Woodbury has “scaled back”:  two characters, two acts. “Whereas my previous work is more symphonic,” Woodbury explains, “this is more like a very intense chamber piece.”

“One woman comes from a very theoretical world, from the academe, from feminist scholarship, and the other woman comes from a world that has absolutely no theory, it’s all about survival,” says Woodbury. “My scholar character is writing this dissertation about the history of the world as seen through the eyes of ‘loose women’ and their sort of sacred role in pre-classical civilization up through contemporary cyber porn. This final person is sort of the feather in her cap—this 108-year-old legendary burlesque queen who lived through the entire twentieth century. And so it’s really my attempt…to tell the story of the twentieth century as seen through the lens of this person’s life story, this person who comes from a very hard-scrabble American existence, and lives a kind of mercenary life. She’s almost like the female underdog version of the character that Daniel Day-Lewis played in ‘There Will be Blood,’ this person who’s sort of admirable, and kind of horrifying, and who is just all about getting ahead, making it through. Some of the same history and themes about America are mined in my piece as are in [that movie], only it’s a lot more silly, profane, and sexual— it’s more like ‘There Will be Skin.’”

Another inspiration for the piece, though shrouded in a bit of mystery (“I don’t like to talk about it much because I get haunted by this person. Seriously.”) was an elderly female neighbor who lived near the artist and died under “kind of sad circumstances.” “She had neighbors who told about how she would tell them stories about being a showgirl back in the day. I didn’t really want to focus on the actual person…but was interested in certain features of her life, because it’s sort of everyone’s nightmare, but particularly an independent woman’s nightmare, that she’ll die alone, with her body not found for days, in this almost sordid way. And I thought how could you take a story like that and actually make that person’s life worthwhile, make that death not just a pathetic death, but a death that has some kind of honor. What was that person’s entire life?”

With so much fuel, Woodbury, grappled with just what form she wanted this fire to take. “I originally tried to think of a way I could do this as a piece of journalism,” she recalls, “but vérité isn’t really my forte. So I thought, why don’t I do an experiment and write a play the way normal people do. And that actually turned out to be a lot harder for me! Essentially I wrote it the way a regular playwright would, and then rehearsed the way a regular actress would.” Once the piece debuted, Woodbury partnered with a director (“the fabulous Abigail Deser”) to refine the work before embarking on tour.

“It’s a piece that’s exploring the role of female sexuality in our cultural lexicon”—and audiences should come prepared for an evening that, true to the fearless spirit of the showgirl tradition that has inspired it, delivers as much of the bawdy as it does the brainy.  “I just had fun, and let myself do a lot of cheap jokes!” Woodbury laughs. “It’s inspired by burlesque, so it’s like, if there’s a silly, rude sexual joke to be made, let’s make it!” Ladies, take the stage.