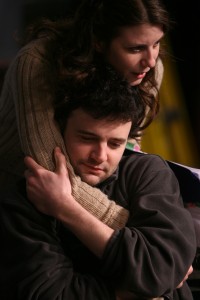 Greg Allen, founder of The Neo-Futurists, brought us the “ever-changing attempt to perform 30 plays in 60 minutes, ” known affectionately to Chicagoans as “Too Much Light Makes the Baby Go Blind.”  This weekend he will slow things down considerably as the director of  one play over five and a half hours. “Strange Interlude” is the conclusion of Goodman Theatre’s twenty-first-century Exploration of Eugene O’Neill.  This 1928 winner of the Pulitzer Prize for Drama is the story of a woman’s efforts to keep three lovers in her life and under her control.  In 1929, the play was banned in Boston for being “a plea for the murder of unborn children, a breeding ground for atheism and domestic infidelity, and a disgusting spectacle of immorality.”  If the ballsy subject matter doesn’t cry out for a little touch of Neo, the structure certainly does.  As the plot unfolds, characters explore their inner thoughts through extensive asides to the audience.  This kind of direct interaction with the viewer should feel right in the comfort zone of Allen and lend itself to the truth-telling aesthetic of the Neo-Futurists.  The nine-act play will include two intermissions and on Saturday and Sunday audiences will get a dinner break. If you have one of those inflatable donuts lying around, this is your lucky play. (William Scott)