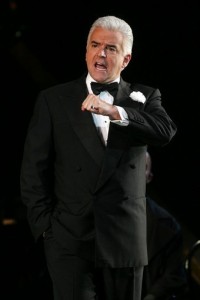 It’s been over a decade since the New York City “Encore!” series revived the musical “Chicago” with Ann Reinking reprising the role of Roxie Hart that she had played toward the end of the original Broadway run twenty years before, choreographing the show herself “in the style of” Bob Fosse. Within six months, the show moved to Broadway and became a smash hit, far larger than the original production ever was, spawning countless tours and international productions and even a mediocre film adaptation that had little to do with this production.

Some of this was timing, to be sure: the original production had the misfortune to appear in the wake of Watergate and Vietnam when dark and cynical were out of vogue. “Chicago” also appeared the same year as “A Chorus Line,” a more upbeat and optimistic dance show that ultimately had far more appeal for critics and audiences, to say nothing of the Tony Award committee. What spawned the revival of “Chicago” in the mid-1990s was former football star O.J. Simpson going on trial for the murder of his ex-wife, Nicole Brown Simpson, and Ronald Goldman.After assembling a “Dream Team” of celebrity lawyers, Simpson was ultimately acquitted of murder charges and parallels between Simpson’s circus-like criminal trial and the characters in “Chicago” were immediately drawn by entertainment pundits and became the catalyst for the “Encore!” revival. Even today and despite the fact that “Chicago” is based on actual events from the 1920s, the memory of the O.J. trial—and other celebrity trials since, including Phil Spector and R. Kelly—keeps “Chicago” plausible and entertaining.

What is particularly gratifying about the current production is the return of Charlotte d’Amboise as Roxie Hart, the original Roxie of the touring production and the daughter of legendary stage and screen dancer Jacques d’Amboise. Like her father, d’Amboise has the technique and grace of classical ballet but is also completely at home in the world of jazz-dance that informs Fosse-like choreography, a rare and wonderful combination that shows from the moment that she takes the stage. Also returning to “Chicago” is John O’Hurley as fast-talking lawyer Billy Flynn, still the most eloquent in a long line of performers who have taken the role even if his dance chops are not quite what they once were. Nothing has been skimped as this production is now well into its second decade for a limited engagement in the town that inspired it. (Dennis Polkow)