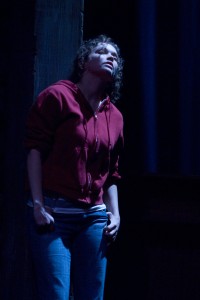 Sugar and spice and all things nice? Whoever wrote that was never a teenage girl. Girls can be as brutal as their male counterparts; what’s worse, they’re getting better at it. Canadian playwright Joan McLeod’s “The Shape of a Girl” examines female bullying, a growing phenomenon that has escalated in frequency and intensity in recent years. And while the issue demands proper investigation, this isn’t it; the piece sheds no new light on this frightening trend.

Braidie (Alice Wedoff) watches as her peer group’s scapegoat is physically and psychologically abused. She struggles between doing the right thing and certain ostracism. Wedoff’s appealing naturalism brings a light touch to a relentlessly heavy script; she maintains the piece’s energy level until its long-in-coming resolution. Wedoff stumbles only as Braidie in flashback; her portrayal of the character’s younger self seems self-conscious. Richard and Jacqueline Penrod’s under-the-boardwalk set is as desolate as the subject matter. (Lisa Buscani)