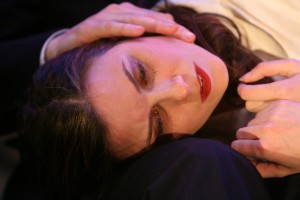 Nine thoughts I had before, during and after the nine-act, five-and-a-half-hour Neo-Futurist production of “Strange Interlude” that concludes the Goodman’s astonishing “A Global Exploration: Eugene O’Neill in the 21st Century” this weekend.

1. At the first of three intermission breaks, a man in the audience began yelling at the theater company: “Why are you butchering this play? This is a travesty!” This led to three thoughts: A) Is this part of the production? Such is the nature of the Neo-Futurists’ production that it could be; B) When was the last time, if ever, you’ve seen this happen? The Joffrey Ballet’s recent remount of “The Rite of Spring” celebrated its controversial opening amongst audience outrage at a time not far from the premiere of O’Neill’s play, but produced now, it’s hard to see what the fuss is about-the production serves as a history of the avant-garde rather than a contemporary embodiment; C) He spoke for a small but definite minority of the audience, including the tragically hip couple who walked out after five minutes, or others who slipped quietly out at intermissions. The Neo-Futurists’ style of meta-theater is not for everyone.

2. This is a fitting end to the O’Neill festival. Epic in length for an epic festival; and a play reimagined as an absurd comedy: now we’ve seen the full range of O’Neill interpretation.

3. The Neo-Futurists are famous for “Too Much Light Makes the Baby Go Blind,” or thirty plays in sixty minutes. This is one play in 330 minutes, and abridged at that. Our contemporary attention spans have a hard time processing this. The audience progressively resembles marathon runners in spirit: “we can endure this.” To their credit, the Neo-Futurists recognize this and have a few fun surprises later in the play.

4. In one of the earlyish scenes, the main character gives voice to the line that seems to be the manifesto for this production: “I’ve suddenly seen the lies in the sounds called words.” O’Neill’s self-deprecation gives the director Greg Allen license to make this a play about the text, with O’Neill’s elaborate stage directions read aloud (and performed, often with physical comedy). The irony they find is that so many of O’Neill’s stage directions, though quite elegant, are equally absurd in their inability to be literally performed. (Many are just character studies, such as this, for Marsden, one of the three would-be amours for Nina: “There is an indefinable feminine quality about him, but it is nothing apparent in either appearance or act.” [Emphasis added.] ) This makes for often hilarious performance, especially in the earlier acts, before it threatens to become the same joke told for five hours. Fortunately, Allen and his actors have more tricks up their communal sleeve. Some triumphant, such as the entire act stripped of almost all dialogue, played only by characters voicing their stage directions. Some tragic flops: the use of a Cabbage Patch Doll to play a minor character is taken too far and has a juvenile pervasiveness to it; the abortion scene unsurpisingly doesn’t get the laughs it strives for.

5. The play itself is something else. With its length and unusual structure (more on that later), it’s hard to believe that it was a smash hit on Broadway when it premiered in 1928, earning O’Neill one of his Pulitzers and running a then-record 426 performances. Now this is a once-in-a-lifetime chance to see it produced. Chris Jones from the Tribune told me at the opening he’d never seen it and that says something if you know Chris. Today and tomorrow’s performances, the only two remaining, start at two in the afternoon and include dinner breaks.

6. The performers do a superior job of handling an astonishing amount of text, moving from comic to deeply serious, of performing scenes without conventional line cues. Merrie Greenfield’s Nina is especially noteworthy, since her role is less supported by broad comic elements and requires a level of nuance and pathos especially hard to sustain within the circus of this production. Her suitors, Joe Dempsey in a marvelous turn as the “effeminate” novelist, Marsden, Jeremy Sher as the debonair Dr. Ned, part lady-killer, part scientist (aren’t they all?), Brennan Buhl as her lovable dimwit husband Sam Evans along with Dean Evans (no relation to the fictional Evans of the play, I think) in a grab-bag of roles, all find the hilarity in their less-than-three-dimensional roles.

7. Wow, Freud really had the culture by the balls, so to speak, in the twenties, huh?

8. The story: Nina loses the love of her life during World War I and spends the rest of her life trying to replace him with three men who can’t fill the void. Banned in Boston-apparently they didn’t like adultery, abortion and feminism back then?-the conceit of O’Neill’s play is that characters give voice to their inner thoughts on stage in a constant stream of asides.

9. This production is full of wonder and problems. You will love it, you will hate it; you will live your whole life in the theater, you think. By its end, you’ll be awed by the sheer accomplishment of it. A fitting end to the O’Neill celebration: puzzling, above all. Or is it just a strange interlude? (Brian Hieggelke)

I’m glad to learn my editor and his wife’s 5 ½ hour time commitment last night wasn’t for naught. As a critic who was also in attendance – strictly for pleasure and with no duties or desire to review – I felt no compunction in leaving at the first intermission. Quite simply for me, a little goes a long way and after two acts and 70 minutes I felt that I had gotten all there was to get: Greg Allen’s idea by which the production simultaneously satirizes and celebrates – in that typically wry and cheeky Neo-Futurist manner – O’Neill’s… Read more »

If one goes to the pony show and only sticks around for the first trick, then that pony shall surely be seen as a one trick pony. You’ve really done an injustice to yourself, Fabrizio, by reviewing a show that you did not see.

Puerile? As in “childish?” Wow, Fabrizio, that couldn’t be more inaccurate. I’ve been involved with the Neos for 20 years now. You can call us wry and cheeky. But I wouldn’t ever call us “puerile.” I’ve observed the EXTREMELY thoughtful,laborious (frankly nervewracking) backstage process for TMLMTBGB hundreds of times, executed it hundreds of times; believe me, there’s nothing childish about it. We can fit more thought and feeling into two minutes than many two-hour Goodman shows (they obviously know that or they wouldn’t have hired Greg Allen). You’re willing to dismiss an entire theater company based on a show that… Read more »

How sad to see the true wonder of this production missed in both the main review – and the rather absurd comments by someone who begins by telling us he did not stay to watch the play he proceeds to trash. I’ve only seen Too Much Light once but even at that, the deeply rooted craft of the ensemble shown. And Strange Interlude drew on all that – and so much heart as well. The production was fun but also respected for the play and engaged us in the sadness as well. I almost skipped the performance – it was… Read more »