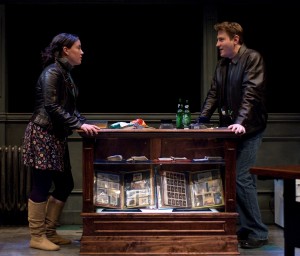 If “Mauritius,” the undeniable new crowd-pleaser by Theresa Rebeck at Northlight Theatre, were a novel, it could have been written by John Grisham and described as a good page-turner.

It’s about two estranged sisters who hate each other, the stamp collection—allegedly worth millions—that they inherit, and three mysterious men who will lie, cheat or hurt someone for it. (It’s also probably the only play to feature a black-market-stamp-dealer character hilariously driven to lines like, “I feel like smoking. There’s something post-coital about a moment like this” after touching a stamp.)

Rebeck, a Pulitzer Prize-nominated playwright with a distinguished stage pedigree—her 2000 commission of Ibsen’s “Dollhouse” for Hartford Stage dissected Nora’s psyche better than any other contemporary adaptation I have seen—is also an award-winning writer for television who has obviously honed her skills on adrenaline-rush dramas like “NYPD Blue” and “Third Watch.” This is clear from the slick dialogue and her expert withholding and release of vital plot information to create tension. But even rabble-rousing repartee and rhythm can’t hide the lack of great insight into the strained sisterly relationship at the heart of this play, nor of some inkling as to what drives people to obsess over a small rectangular adhesive piece of paper no bigger than the size of your thumb. The play’s contrived plot twists, underdeveloped characters and predictable ending, staples of Grisham’s most well-known works from “The Firm” to “The Pelican Brief,” only add to “Mauritius’” superficiality.

And yet, and here’s where I perform one of those convenient critical somersaults of opinion, it didn’t prevent me or my companion from having a good time. In his words, “The more I think about that show the more I like it as popcorn entertainment. Just because it’s a drama in a theater doesn’t mean it has to be high art.” Good point and nicely stated. But I would be remiss in hiding my disappointment that this proven writer didn’t aim for greater heights with “Mauritius.” As it stands now, the play is fun but a bit hollow.

As for cast highlights, Lance Baker, one of this city’s drollest comic presences, plays the aforementioned stamp thug with equal parts scariness and sarcasm—you never know if he’s joking or serious which is exactly what the part calls for. The beautiful Anne Adams, who bears an uncanny resemblance to film actress Guinevere Turner, is simultaneously bitchy, sexy and flirty as the younger sister. And as uptight and self righteous older sister Mary, Suzanne Lang is deliciously despicable, making me imagine what a grown up Muffy Tepperman—that preppy and pompous pep-committee high schooler brought to life by actress Jami Gertz in the 1980s series “Square Pegs”—might have been like.

I was not surprised to learn that the man at the helm here is Rick Snyder, who also brought tactful economy to his direction of Yasmina Reza’s “Art” currently at the Steppenwolf. After all, like “Art,” Rebeck’s play is a short, actor-driven affair with universal appeal. “Mauritius” may not be high “art,” but it does add up to one terrifically entertaining evening of gripping comic melodrama. (Fabrizio O. Almeida)