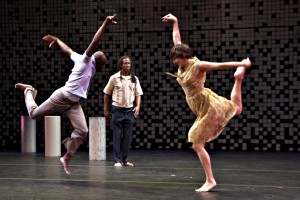 After several years of solo work, David Rousseve has returned to group choreography with a large-scale piece for his company REALITY—the final chapter in a trilogy surveying the complexities of the bittersweet. Rousseve returns to ensemble work whole-hog, seeming to embrace the entire world in his theme; “Saudade” (yearning, in Portuguese) collects vastly different movement forms and places them side by side—South Asian, West African, Indonesian and postmodern dance—to translate passionate ambivalence into a global tongue. Theatrical movement segments by the ethnically diverse company form recitatives between a series of first-person monologues delivered by Rousseve, each from the perspective of a different southern African American throughout history. It’s an unconventional stew of forms, not so much blended as tossed together and scattered across the stage for consideration.

“What I like about those juxtapositions [of dance styles] is that they’re all different ways to communicate and I like the accessibility of straightforward narrative text,” Rousseve tells me over the phone. “In the worst-case scenario it’s chaotic, but the beauty of dance is that it can speak to metaphor and the beauty of text is that it can speak directly. They deepen each other.”

The direct tone of the spoken text in “Saudade” is a rarity in contemporary dance and the fearless sincerity of Rousseve’s delivery is disarming; the monologues are highly theatrical, in character, as Rousseve puts it, “down-home African-American storytelling.” We hear the story of a slave who pays dearly for teaching her sister to read and write, an older gentleman who develops an attachment to a raggedy stray cat, a terminally ill man ready to surrender his will to a hospital bed and reruns of “I Love Lucy” and a survivor of hurricane Katrina. The stories were written by Rousseve in response to choreographic work in the studio. “The stories are all fictional. Or, theoretically fictional. Once I sat down and looked at the text, I realized that they’re all very emotionally autobiographical. I was surprised at how deeply personal they were.”

Death—in several cases, of animals—was a recurring theme in the narratives. I ask Rousseve if this was a conscious construct. “This whole series started around death,” he says. “I actually never really thought about that…but it all started after my father died in 2004 and I went home for the funeral. I was struck by the services, in that people were in real, genuine agony—in grief—but also elated that this person had crossed over to what many believed was a better life. It really struck me because death, especially for African-American people, going back to slavery, is often considered a release from a really harsh existence.

“Death, in a way, represents the extreme of bittersweetness. It is the most agonizing thing we know. So the piece sprang from issues surrounding death and I think they fed the movement in a very direct way. Actually, there are a lot of movement metaphors that surround going limp or dying. In fact, the very last image of the piece, you could say we all go to sleep on the stage or that we all die on the stage. It’s intended to be very peaceful.”

Interspersed movement sections, though primarily drawn from cultures across Asia, are set to the sensuous, longing strains of traditional Portuguese fado. The music is the very embodiment of bittersweet, forming the unifying thread between oft-frenetic dance segments that vie for attention on the stage. Yet Rousseve and the company seem aware of potential clashes both aesthetic and thematic, calling out the audience’s imagined reservations or critiques. As two dancers stomp and leap with joyful abandon, a bikini-clad girl in heels crosses the stage holding a card that asks the audience if they believe the dancers are faking it. After a minute and a half of high-pitched ululating, one cast member is told by another that her performance was stupid, the critic mimicking the sound with spiteful irony. The ululator’s response: “now that was stupid.” Sincerity, transparency, specificity are the lifeblood of the piece and undergo constant refinement throughout the evening. “Saudade” challenges the audience to approach in the same good faith.