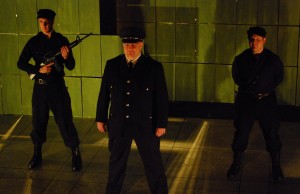 Some background: Two years ago, a theater company called Black Sheep Productions arrived out of nowhere with a play called “Another Day in the Empire,” a seething, hilarious takedown of middle-class suburbia and a consumer culture gone mad.  The word prescient gets thrown around a lot, but in this case it’s legit.

Playwright Steve Spencer’s jab at pre-economic-freakout America—high on the crack that is flat-screen TVs and a mortgage you probably can’t afford—worked because he had the confidence to pace things just so, and he filled it with the kind of bitter-hilarious dialogue that should be engraved on a plaque and handed out to every douchebag in America.  Great stuff.  I had—still have—a crush on this play, which received a punchy, bang-on-the-money production from director Vance Smith.

The whole gang—playwright, director and theater company—are back again with a new play that sails similar waters.  But formatively, “Camp Freedom” is something different altogether—a cartoon in the key of “Dr. Strangelove”—and it’s exasperating to watch.

Sure, “Empire” was a soapbox screed dressed up as entertainment.  But it had major style and wit, and it always felt believable.  Spencer pulled no punches, but he wasn’t indulgent.  The play was pissed-off and cynical, and intelligently so.

This time around, Spencer envisions a nation collapsed in on itself thanks to an overzealous Department of Homeland Security and a non-existent economy.  Bouncing a check will get you sent to an interment camp: “Billions of years of evolution have led to accounts payable.”  A guy is arrested after an agent shows him a photo taken at a rally: “I didn’t know it was a protest,” he says. “I thought I was in line for the liquor store.”

Dick Cheney runs the joint and his preferred method of torture is prolonged viewings of Nick at Nite.  “To lessen our environmental footprint,” he says, “no food.”  When he prays, it goes something like this: “Oh sweet Republican Jesus, thank you for my power.”  This is a good example of Spencer’s brand of rantiness—the carbon-footprint joke lands just about right, whereas the Cheney stuff is overkill.

Eventually, a small group of prisoners band together and expose the camp as a sham.  Or something like that.  “Up yours, society, you can keep your paperwork!” goes one Spencer-flavored kiss-off.  You get his point—life would be a lot sweeter if we all got off the treadmill and lived off the land a little—but he might as well have a bullhorn at your ear.  It’s like intellectual indigestion.  Where’s the fun in that?

Here’s the thing: “Another Day in the Empire” was so good, as far as I’m concerned Spencer has earned a gimme.  Let’s agree to write this one off and hope he can get back to fighting form.  I’m a believer.  (Nina Metz)

First off, I didn’t see Empire, but I do see a lot of theatre, and I really liked this show. After reading this review, I can’t help but think that Ms. Metz clearly set herself up for disappointment. Compare the company’s “coming out of nowhere” status that they held with Empire, a status void of expectation, with the now astronomical “crush” status Metz forced upon their shoulders. Camp Freedom is consistently hilarious and, at times, even moving. The biggest oversight in Metz’s review is her failure to mention the cast at all! The entire ensemble is fantastic; great comedic performances… Read more »

I was very surprised to read this review. My husband and I did see EMPIRE, based on Ms. Metz’s glowing rave in the Tribune, and we loved it, which is why we rushed out to see CAMP FREEDOM! during previews. While this show is a very different animal from EMPIRE and perhaps not quite as sharp, overall I have to agree with Leon: we laughed ourselves silly! The writing is smart, funny and touching and the entire cast is stellar, especially Noah Simon as Agent Mahoney and Christopher M. Walsh as Cheney. We are going back with friends in a… Read more »

I agree with the other two comments. I have seen both of these plays. Camp Freedom is a slightly different beast from Empire, but that is what makes it so good. Freedom is very timely and thought provoking, and yet very serious and heavy handed since the world is indeed collapsing before our eyes. They are two different plays, so it’s unfair for Metz to say one is better than the other. In her review, she doesn’t even mention the actors by name referring to one actor as “a guy.” The actors deserve the accolades, too. I realize as a… Read more »