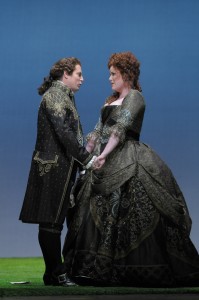 Once upon a time, the principal responsibility of the director of an operatic production was to make sure that the singers didn’t bump into one another or the scenery on stage.  Then, came the idea of the “concept” director where a novel idea—whether inspired or not, whether logical or not—ruled the day.  It became increasingly commonplace for stage directors to add operas to their resumes, even if said director was not particularly musical and even if the staging had nothing whatsoever to do with the music.  Oh well, at least the drama of the piece would be served, or so it was reasoned.  Very, very rarely, you end up with operatic direction that somehow misses the point of both the music and the drama, no small feat, given the odds of some aspect of one or the other working out even with a clueless director.  Such is the case with Lyric Opera’s new production of Mozart’s “The Abduction from the Seraglio.”

American director Chas Rader-Shieber wants to make this the story of the Pasha, the Middle Eastern ruler who is so insignificant to the piece that Mozart never bothered to give him music to sing.  Nonetheless, we are given not one, but two Pashas, one the “young” Pasha of the piece itself, a spoken role taken by actor David Steiger and performed in German, and the other an “old” Pasha, an uncredited silent supernumerary whom we are shown at the beginning watching the opera in flashback and who occasionally watches himself and the others as the action proceeds.  But the real story here concerns Konstanze, a female captive in a sixteenth-century Turkish harem, and her would-be rescuing boyfriend Belmonte, portrayed by a pair of Lyric’s Ryan Center alumna, soprano Erin Wall and tenor Matthew Polenzani.  But even their best moments together are made trivial by staging that always works against, rather than with, the singing and the story.  None of this is helped by the fact that the scenery itself is often given bizarre amounts of distracting attention during climactic dramatic moments, such as key arias that are spoiled by stagehands coming out and literally turning around a raised blocky platform that from the front, at least, is supposed to be a grassy field.  From the back, however, we see merely the bare plywood structure, like seeing the false fronts of a Hollywood backlot from the other side.  And so it goes.  The Pasha is dressed like a street urchin, his overseer Osmin (Italian bass Andrea Silvestrelli) like a samurai and his henchmen like sumo wrestlers in drag.

As for the singing, it is fair, all around, but nothing exceptional, the score calling for singers to ornament the repeats of their arias in ways that only Erin Wall really tried to approximate.  Most were having trouble projecting over the orchestra, despite Sir Andrew Davis’ best attempts to keep balances.  Ensembles were tight, but did not blend or balance well.  Polish soprano Aleksandra Kurzak, who was to have made her Lyric debut as Blonde, was indisposed with laryngitis and Ryan Center first-year-member Angela Mannino stepped in to replace her, distinguishing herself particularly by her acting.

Given the current climate of misunderstanding between the West and the Middle East, many of us were hoping that this new production—Lyric’s first since 1984, only the second in the company’s long history and the first Lyric Mozart production in two years—would be just what was needed to help alleviate tensions, as luckily the far more effective recent productions by Chicago Opera Theater (2006) and last summer’s Chicago Symphony Orchestra performances at Ravinia certainly did.  After all, Mozart was forward-looking enough to give us far more true-to-life characterizations of Muslims and Middle Eastern culture than may be found in much of today’s Western movies and media, a message that is sad to see squandered away in stereotypes.  (Dennis Polkow)