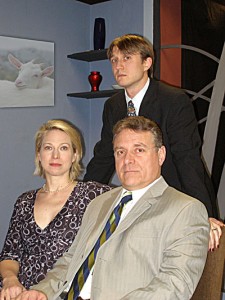 What’s your relationship dealbreaker? Where’s the line your lover must avoid to keep from decimating everything you’ve built together? Redtwist Theatre’s production of “The Goat, or Who is Sylvia?” explores that thorny territory.

Martin (Michael Colucci) and Stevie (Kendra Thulin) are hyperarticulate, too-clever-by-half New Yorkers who’ve been happily married for twenty-two years. As firmly rooted as they seem, the couple is rocked by Martin’s transgression. Edward Albee’s script features his trademark wordplay and head games; while he neatly sidesteps some unavoidable issues, it’s still great to hear Albee’s language and watch him examine the fallout of societal taboo.

And while both actors struggle to find the believable emotional intensity necessary to convey the couple’s pain and confusion (Thulin’s frustrated wail sounds like a vocal exercise), Red Twist should be applauded for tackling Albee’s subject matter. Ross Hoppe’s postmodern set is pristine; it’s a shame it (and the relationship) ends up in a shambles. (Lisa Buscani)