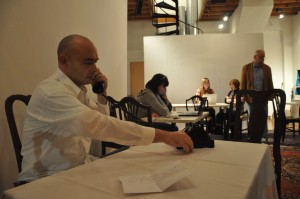 Depraved, ludicrous. Gripping, resonant. Fetid, smug. Powerful, impressive. Anti-Semitic?  At 70 years old, renowned English dramatist Caryl Churchill has been garnering some of the most conflicting reviews and heated debates of her distinguished career recently: and for a play with a running time of less than ten minutes. “Seven Jewish Children: a play for Gaza” (billed as a “history of Israel”) premiered in January at London’s Royal Court Theatre to a rather shocking torrent of both praise and condemnation rarely seen in contemporary theater. “I think we have problems, both in Britain and America, dealing with art that attempts to [grapple] with immediate political issues,” says  Andrew Manley, the Colorado-based British director who is staging the Chicago (and most likely U.S.) premiere of Churchill’s controversial play at Pilsen’s Rooms Gallery this weekend. “[But] theater is one art form that can respond so quickly.”

Structured as seven brief conversations between various unidentified adults about what to tell (or not to tell) an unseen Jewish child about events spanning sixty-plus years of Israeli history, from the Holocaust to the recent conflict in Gaza, Churchill’s script (which can be downloaded for free online) is decidedly skeletal—no character delineation, no stage directions; just short, clipped lines of text, each beginning with either “Tell her” or “Don’t tell her.”  But in just eight brief pages, this esteemed writer has created immense cannon fodder for outspoken critics on both sides of the Israeli/Palestinian debate.

A patron of the Palestinian Solidarity Campaign, Churchill has waived royalty fees for anyone interested in producing the play, asking instead that companies present the work free of charge, and collect donations at the door for the British charity organization Medical Aid for Palestinians. Manley, who has spent a great deal of time in Israel, where “plays about the conflict are quite [common],” believes that Churchill’s play “very accurately represents what many people in Israel feel.” And in an effort to give the challenging play perhaps a greater chance to be absorbed, Manley has chosen to stage each of the seven scenes simultaneously, in seven different areas of the gallery, running on a continuous loop over the course of approximately three hours. This way, Manley says, “the audience members can go back and really listen [to each piece],” giving them the opportunity to encounter the discussions onstage, and hopefully spark some discussion offstage as well. “If they hate it, it’s only ten minutes long. If they love it, they can stay for three hours.” (Valerie Jean Johnson)