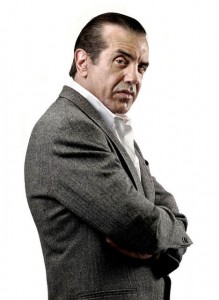 The 1993 film adaptation of “A Bronx Tale” was so memorable that it became difficult to imagine how such a compelling story full of such colorful and contrasting characters could possibly have originated as a one-man show back in 1989.  Then-relatively unknown actor Chazz Palminteri wrote it based on his 1960s New York childhood as a tour de force for himself, since he was receiving such minor roles at the time and had been fired from his supplemental job as a bouncer.  Robert De Niro was so wowed by the show that he went to Palminteri for the film rights, but Palminteri shrewdly held out—reportedly turning down offers up to and including one million dollars—calmly insisting that he write the screenplay and star in the film.  De Niro eventually gave in on the condition that De Niro co-star and for the first time in his career, also direct.  A career of playing tough guys and gangsters and even an Oscar nomination later, Palminteri has come full circle and resurrected the one-man version two years ago on Broadway (the original had only played off-Broadway for four months) under four-time Tony Award-winning director Jerry Zaks to success so immense that a national tour is in progress, currently playing downtown.

As wonderful as the film is, Palminteri’s one-man performance is even more revelatory.  Yes, he plays Sonny, the same role he played in the film, the dapper crime boss who is idolized by young Calogero (Palminteri’s real first name), who is caught between the honest work ethic of his own bus-driving father and the freewheeling fast world of Sonny, whose tips for rolling dice are more than Dad takes home in a week.  But the amazing thing about Palminteri’s performance is that he is every bit as engaging as the good guys as he is the wiseguys, and the speed and precision with which he can have dialogues between characters is handled so convincingly that it is as if the show has an internal cast of its own.  Palminteri is able to have us believe that he is 9 years old again, crying in his parent’s arms, and it is a really haunting moment that even the best child actors would be hard-pressed to approximate.

But the most important “role” in the play is the narrator, i.e., Palminteri himself, going back to his old neighborhood forty years after he grew up there, and spontaneously sharing his coming-of-age journey, a reportedly true story that began when Palminteri witnessed a murder on his front stoop but never broke the neighborhood code of becoming a “rat” by informing on the boss who did the deed.  The narrator gives the story context and purpose, and makes the whole thing a morality tale after the fact, which is another huge advantage of unspooling this yarn in hindsight rather than in the real time of a film, where everything has to be more or less taken at face value.  Is Palminteri romanticizing what transpired between his father and the crime boss, as memory often does?  Did the crime boss and young Calogero really become as close as this “tale” would suggest?  Was every conversation as full of punch-lines and labyrinths of well-timed vulgarity as Palminteri’s side-splitting stories indicate, or do laughs make trauma easier to revisit and transcend?  None of that really matters, of course, but this sure is one hell of a no-holds-barred in-your-face tale, shared with gargantuan skill, pathos and humor.  (Dennis Polkow)