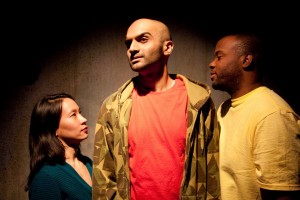 Nobody knows anything. So we fudge and cheat and rely on shorthand cues to get by, boxing our experiences into compartments. People are idiots and we think: Why is it my job to educate you? We stereotype the world while it stares and judges and stereotypes us right back.

Forget post-racial America; we live in a most-racial America—a nation at once curious and bumbling, absurdist and inspiring. A place where misperceptions are commodified and commercialized and available On Demand. We make a fetish of our differences but chafe when someone is stupid enough to single them out. “What’s your problem?”

To some extent, “American Ethnic” (developed for Remy Bumppo Theatre Company’s thinkTank program) does the very thing it decries, pointing a finger at the media and calling it “other.” But see, we are blogs and YouTube and Facebook, and if you think these things aren’t media—if you think theater isn’t media—you’re kidding yourself.

That said, this is one helluva show. Three writer-performers occupy the stage like they’re standing on the ledge of a building: Usman Ally (seen last fall at ATC in “Celebrity Row”), local rap artist and playwright Idris Goodwin and Kelly Zen-Yie Tsai, a Chicago native and spoken word performance artist now based in Brooklyn.

Each has something to say about the human desire to have it both ways: we’re pissed off when lumped together as a single something—you don’t know me—yet insulted when our differences, the very influences that shape our outlook on life, are dismissed or ignored. You want to know what that sounds like? What that looks like? Here is a trio that understands what it means to write with momentum.

Pop culture reflects these contradictory impulses, but rarely can it approach the reality of our lives: “These orange, big-boobed women,” Tsai says of the Bravo and Oxygen shows that she watches, hypnotized, “who cry over missed invitations to gala fundraisers, take their dogs to spas, would die without Dior, Prada, all of that hard, dead, shiny stuff.” None of it means anything when you’re walking down the street to catcalls of “Hey, China! Hey China! Hey Chinaaaaaaaaa!”

The show (directed with a nice sense of flow by Nick Sandys) is comprised of vignettes—sketches, monologues, in-your-face pronouncements—and it is hilarious and smart and loaded with real thought. It is genuinely hip-hop, and—with the exception of a piece about Sally Hemings that feels shoehorned in—it is entirely about the here and now. We live in the present. Get used to it.

More to the point, “American Ethnic” is a disembowelment of television. But as much as TV reinforces easy categorization—”Fuck ‘The Simpsons,'” Ally says, “and fuck Apu in particular!”—I would argue that the right kind of show can also have a normalizing affect. Whatever your opinion of a something like “Little People, Big World,” the series has totally de-otherized the very fact of dwarfism. Our differences are what they are—no more, no less. Stereotypes are offensive, but in entertainment they’re just boring.

All actors of color have casting-session war stories; “American Ethnic” has the rich humor to acknowledge an actor’s complicity in this charade. Ally: “I am unapologetically from the East. And not just any East, it’s that scary-as-shit East.” Goodwin, on thugging it up and trading “Hey, how’s it going” for “What it do, hay bay-bay?” About straddling the line between “that safe but dangerous token black friend” and exchanging “that MFA for a G.E.D, playing that P.I.M.P. getting every ass into his B.E.D.”

“And when you mangle my name and call me up,” Ally parries back, “and I walk into that room, and stand in front of the camera, and look at those execs, and you ask me to read for Rashid the foreign-exchange student who has one scene with such classic stars as David Hasselhoff or Patrick Swayze, and you tell me to do it again with a thicker accent, and to seem more scared, or scary, more foreign or more funny, more terrorized or more terror-inducing, building-dropping, or throat-slicing, more offending to everyone who matters in my life more Andy Kaufman or more Balki from ‘Perfect Strangers,’ catch-phrasey, funny-accented schmuck, I MIGHT NOT DO IT!!” Pause. “Or I just might.”

Ally and Tsai perform with an exuberance that draws you in; Goodwin’s energy is muted and it’s an effective counterbalance. His story of a trip to the Dead Sea in Israel accompanied by a Muslim guide from Jordan is told with simplicity, and it is probably the most intellectually charged scene of the night because Goodwin has the good sense to confront his own biases.

The production has a short run—just two weekends left—with good-for-you post-show discussions scheduled after each performance. I’m sorry, but this show is too cool for that. The Greenhouse Theater is bracketed by bars, any one of which would provide a better environment to continue the conversation. To quote the show: America couldn’t be more ready. (Nina Metz)