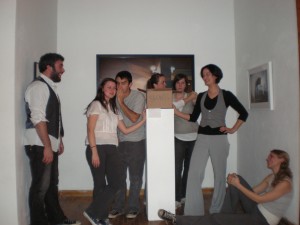 “The Secrets Project, ” Genesis Ensemble’s interactive debut work, explores the compelling topic of confidences: what should you share and when? Who should you share it with? Unfortunately, the piece lacks the necessary details that make a secret compelling in the first place.

Several vignettes begin with potential: an ensemble member who works with homeless teens struggles under the weight of their secrets; one performer’s parent conceals his alcoholism. But the stories aren’t given room to grow; they’re fragments of conflict. The group’s interactive efforts are successful; they include the audience without intimidating it. But the piece’s tone needs variety and the stage pictures created to support the text detract from it.

It’s refreshing to see a new troupe try something so ambitious; creating original work can be difficult as a group finds its footing. Here’s hoping Genesis Ensemble’s next outing is a little more specific and focused. (Lisa Buscani)