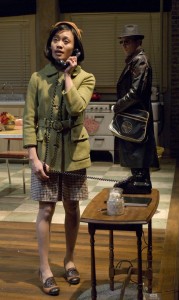 Theatrical candy, occasionally delicious but more often a bit cloying, the Court’s seeming answer to seasonal affective disorder is a psychological thriller that delivers less suspense than laughs at its own campiness. The story itself, involving con artists invading an apartment and the blind, petite and spunky woman-child who outwits them in their own game, is very fun, with smart writing and a perfect pace. However, the acting is uneven, running the gamut from John Hoogenakker as a frenzied psychopath to Emjoy Gavino as the flighty heroine, affected and somewhat silly in her seeming attempt to channel Audrey Hepburn, who played the role in the film. For all its banter and suspense-driven plot, the show gets dragged down in awkward moments resulting from this lack of focus, making it not just fluffy but treacly, and the best moments arise when the show seems utterly aware of how ludicrously dated and frivolous it is and lets the audience in on the joke. (Monica Westin)