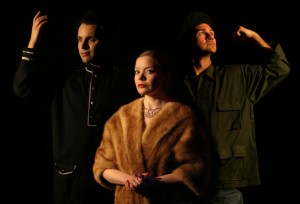 Most of us would agree that Tim Rice and Andrew Lloyd Webber’s score for “Evita” is their best, and this is saying something when you consider their other musical-theater achievements as a duo (“Jesus Christ Superstar”) or individually (“Chess” for Mr. Rice; “Aspects of Love” for Mr. Lloyd Webber).  And most of us would agree that Hal Prince and Larry Fuller’s original production of the show, first seen in London in 1978 and on Broadway the following year, is one of the most perfectly realized stagings of any musical within the last 20 years.  I was fortunate to see this version at the age of 15 in Paris, during its 1989/1990 World Tour starring Florence Lacey, Broadway’s final Eva.  And subsequently ten years later, via a production starring then-unknown Raul Esparza as Che, who stole the show from his Eva in a National Tour slated for Broadway but that ended on the road prematurely.  So going into director Fred Anzevino and Theo Ubique’s revival of “Evita,” boasting a band of three with a miniscule cast of ten performing in a tiny café setting, I fear I was prepared to be less than overwhelmed. Two and half hours later—having emerged from the show seduced and enthralled by this sensational Rogers Park revival and leading lady Maggie Portman in the title role—I realized that Anzevino and company had done one better than making me forget about the original; they had made me accept a completely different yet no less brilliant way of looking at and hearing this musical masterpiece.

This is more impressive when you consider the difficulty of the original material.  “Evita” doesn’t really have a book—not surprising for something that began life as a concept album—and is more of a song cycle providing emotionally charged musical impressions and documentary-like historical snapshots of Eva.  What Prince’s production had done brilliantly was mask this fact, through a series of beautifully realized conceptual numbers:  the revolving bed/door of “Goodnight and Thank You” as a metaphor for Eva sleeping her way to the top; “High Flying, Adored” with the image of a servant dancing with Eva’s Dior dress in a gorgeous spotlight in counterpoint to the image of a jeweled Eva alone at a vanity table; a clump of Argentine aristocrats tiptoeing around in frozen poses; choreographer Larry Fuller’s menacing soldiers gliding past them.  These were gorgeous and glitzy numbers bathed in harsh lighting, the brilliance of their look only matched by the ambivalence of the composers’ feelings towards Eva (via Che’s astringent lyrical interjections and mocking commentaries).  Anzevino’s production is just as psychologically neutral (you’ll decide for yourself whether Eva was a saint or “the greatest social climber since Cinderella”), given that each and every one of Tim Rice’s alternately conflicting lyrics registers in the intimate environs of the café setting.  And if he can’t provide the gloss that characterized the Prince staging (the costumes sometimes betray Theo Ubique’s obviously limited budget), he goes the opposite way, working with lighting designer David Heimann and choreographer Brenda Didier to infuse this up-close-and-personal version with a small-town warmth and heat (the tango figures prominently into Didier’s musical staging) that the original never had.  It still doesn’t hide the fact that there exists in Rice’s song cycle gaps in storytelling (I have always preferred Che’s “The Lady’s Got Potential,” charting Colonel Juan Peron’s rise to political power and used in Alan Parker’s 1996 film version, to the stage version’s sinister game of musical chairs number “The Art of the Possible”), but Anzevino’s brisk pace, attention to minute detail in the performances, and inspired musical choices (the actor playing Che is an accomplished musician and Anzevino has capitalized on this) makes you overlook this, as well as infuses a storytelling unity to the entire evening.

Of course, any production of “Evita” begins and ends with its leading lady.  I would describe Maggie Portman, like Argentine songstress Elena Roger who recently starred in the 2006 London revival, as diminutive in size, domineering in nature.  This Eva is conniving from the start, and even though I wish Portman had found some of Eva’s softer tones in Act I, there is no denying that her Casa Rosada/”Don’t Cry for Me, Argentina” scene lands the tenderness to her character that makes it possible for the pathos to flow during the show’s last fifteen minutes.  Vocally, she acquits herself well in what is undoubtedly one of the most demanding female musical-theater roles in the canon, but is still a little thin in her upper register.  She’s a fine belter and able to mix the chest and head almost seamlessly for most of the evening, but a few more performances should see her nail those challenging and steady streams of Es she must belt in “A New Argentina” (“He support YOU, for he loves YOU, understands YOU, is one of YOU!”).  As Che, Chris Damiano hits those high notes for men that Lloyd Webber loves and delivers a beautiful musical simplicity to “High Flying, Adored,” keeps up with the unrelenting 7/8 time signature of “And The Money Keeps Rolling In” and rocks out “Rainbow Tour” with clownish jocularity.  As Juan Peron, Jeremy Trager’s dark handsome features make him look perfect for the part of a Latin dictator, and his intense vibrato—something I have not always enjoyed in his previous performances—here brings much-needed edge to what is usually a thankless part.  But overall, an achievement on every level. (Fabrizio O. Almeida)

Couldn’t agree more. I saw it last Thursday night, and was so seduced, haunted and charmed that have been thinking of little else since. This is a remarkable, revelatory and intimate experience and an emormous achievement for Theo Ubique. Lloyd Webber always said that he wanted the audience to actually be the crowd of the story, and here that is so literally true that one of the soldiers damned near kicked me passing by when his leg jets out.