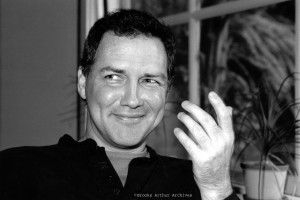 “Y’know what I mean?” is one of those quick interjections comedians like to throw in for rhythmic purposes, but Norm Macdonald says it so often (it feels like approximately seventy times in a twenty-five-minute interview) that maybe he’s unconsciously asking, “Do you understand the joke?” See, Norm’s biting, occasionally offensive and/or incoherently mumbled style has been known to go over the heads of TV execs (see “The Norm Show”) and mainstream audiences (see his coldly received David Hasslehoff one-liners on SNL’s Weekend Update). So when douchebags and dimwits don’t get your jokes, you take ’em someplace else: stand-up clubs.

“In terms of comedy, it’s preferable,” Macdonald says of the stand-up scene. “Travel sucks. Like I would do one room forever, I don’t really care where I am. But the only place you can do that is Vegas, and then they make you do the same material every time. And, of course, you can’t offend anyone, so you can’t do stand-up very well.”

Fellow comedians don’t even understand Macdonald all the time (see his appearance on “Roast of Bob Saget,” in which he basically satirizes stand-up itself), so he relishes the opportunity to get out of Hollywood. Living in a city that’s obsessed with focus groups, Macdonald has fundamental problems with the whole collaboration process.

“Let’s say you have a Leonardo da Vinci painting,” he says, hypothetically. “And then Picasso walks in and says, ‘Hey man, I’m gonna change the nose.’ And then Monet walks in and says, ‘I’m going to put some yellow shit over here.’ By the end it would be all shit. It would be the greatest painters painting the worst shit ever.”

“That’s why I like stand-up, you just get up there and you do your show,” he says. “You would never think of going up to the owner and go, ‘Hey, what do you think of this?’ Not only that but, ‘Can I do this one?’ Like, ‘Will this work?’ Your act would not be good.”

After his upcoming stand-up tour, Macdonald plans on making a triumphant return to television with an FX sitcom entitled the “Norm Macdonald Reality Show,” which he is quick to point out is not actually a reality show, and though his character is loosely based on him, he says, “I’m not going to be playing myself, because I plan on raping a lot.” (Andy Seifert)