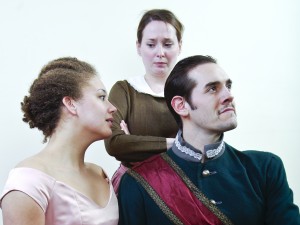 You’ve got to hand it to Oak Park Festival Theatre. In the height of the iPod era, this steadfast suburban playhouse (now in its thirty-fifth year) manages to stay afloat by producing classic works inside a historic eighteenth-century mansion, (at least when the weather’s too cold for its outdoors venue in Austin Gardens). The theater even serves dainty tea and cookies in the elegantly restored library during intermission—an endearing touch that somehow feels more authentic than kitschy.

So it follows that “Arms and the Man,” written in 1894 by George Bernard Shaw, sits comfortably in this grandiose, antique space. The play, set during the 1885 Serbian-Bulgarian war, centers on the wealthy Petkoff family and the miscalculated romances that brew inside their Bulgarian estate. Betrothed to a Gaston-esque “war hero,” the family’s daughter Raina (Sienna Harris) instead falls for a raggedy enemy soldier (Adam Breske) who crawls through her bedroom window seeking refuge. With a brazen bout of courage (and lust) Raina convinces her mother to hide the charmer in their mansion for a single night. But when the mysterious soldier shows up at the family estate after the war’s end the women of the house have some ‘splaining to do.The show is satisfyingly funny—after all, this is Shaw we’re talking about here, master of theater’s tried-and-true comedic devices, most of which director Kevin Fox milks with carefree expertise. The show’s leading lady, however, has obviously been directed to play her part pointedly over-the-top, to showcase that upper-class pretense Shaw so successfully critiqued over his career. This choice works in spurts (particularly when Raina drops the glitzy act in front of her true love) but for the most part the facade is just exhausting to watch.

But strong performances from both Raina’s male suitors—Major Sergius (a hilariously conceited Michael Perez) and Captain Bluntschli (the naturally charming Breske)—anchor the show and allow the Shaw’s humor to breathe easily. The always-dependable Kathy Logelin also stands out as the Petkoff’s ambitious servant, as does her subservient fiancee Nicola (Daniel Bakken).

Ultimately, director Fox is able to skillfully brush the dust off this artful classic, crafting a tight, fast-paced production that will hold the attention of even most techno-centric theatergoer. (Whitney Rose)