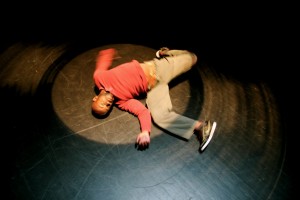 “Audiences should bring all their expectations of hip-hop culture and put them in one pocket,” says poet/performer Marc Bamuthi Joseph of his widely acclaimed performance piece “the break/s.” “And then, those same expectations,” he continues with a warm and infectious laugh, “they should throw out over their shoulder.”

Sound advice from an artist whose enormously successfully career is marked by constant evolution. Joseph began his life in performance at the age of five, acting in television commercials, then moved on to the Broadway stage [“The Tap Dance Kid”] when he was just ten. In early adulthood he became an English teacher, the vocation whereby he became involved with slam poetry and spoken word performance. Within the last ten years his solo devised work has taken the theater/dance/poetry worlds by storm and, in turn, taken Joseph around the world. This week he brings his act to the MCA with “the break/s: a mixtape for the stage,” his “travel diary across planet hip-hop.”

“What I tried to create,” Joseph describes as I speak with him from his home in Oakland, “was [a simulation of] the very best parties that I’ve ever been to, onstage—[combined] with hard topics and travel. It’s a very personal, intimate story, semi-autobiographical, but also has a wide lens, I think, in terms of its perspective, as we tackle identity in several cities and several countries [around the world]. It’s a [view] of identity politics through the paradigm of hip-hop culture; it’s a multimedia exercise wherein live sampling, dance, poetry, turntablism and documentary filmmaking are all present; and it’s a fun spin of storytelling where the audience is hopefully as emotionally invested in the piece as I am.”

And though he certainly had the chops for performing from an incredibly early age, it wasn’t until he became a teacher that Joseph began to create original work, inspired by his experience in the classroom. “I loved being a high school English teacher…. I started when I was 21, and in some cases I was barely older than the students that I was teaching. What we had most in common was not so much hip-hop music but a culture born out of the hip-hop medium, which included everything from politics to literature, and a common approach to language. So it’s been this evolution, and deconstruction, of an approach to language through the framework of hip-hop that has really afforded me an opportunity to develop my pedagogy over the course of the last thirteen years.”

It was through the classroom that Joseph encountered the world of the poetry slam, where he quickly gained notoriety as a National Poetry Slam champion, which in turn led to his first commissioned solo stage work in 2001. And it is through working as an educator that Joseph discovers and shapes his particular methods of making art. “I think my process mostly begins in the classroom,” he explains. “Through my work with high school and university students there is a level of intimacy and a level of discourse that is always very provocative, that forces me, in the process of planning out classes, to come up with critical questions that distill massive macro-topics into bite-sized chunks. So from the educational experience comes the poetic experience. And I think from that point I look for choreographers, musicians, lighting designers, directors— collaborators that I’ve been inspired by over the course of time and invite them to come up with similar questions and ideas based on the scenes that I’m dealing with at the time. So I’d say that education comes first, and then the poetry, and then the seeking of collaboration at which point, once the collaborators are in place, then the intersection of all the elements come into play.”

But Joseph’s work with young people is certainly not relegated to the classroom. “The work that I do with youth is primarily channeled through my nonprofit organization, Youth Speaks, which is based here in San Francisco [with affiliates in Seattle and Hawaii]. And I’m in a partnership with a network of organizations and educational institutions around the country, [for which] a kind-of nexus is an annual festival called Brave New Voices.” The festival, which will be held in Chicago this year, has inspired a seven-part documentary series that premieres April 5 on HBO [“Russell Simmons Presents Brave New Voices”] “articulating the journey of several young folks from around the U.S. coming to poetry, coming to performance, and working with mentors that we’re engaged with all over the country.”

In preparation for this year’s festival, Joseph has been collaborating with local community-based organizations, including Young Chicago Authors and Little Black Pearl “to outline a strategy for the inclusion of young folks into Chicago’s mainstream, but also finding this intersection of art, politics and civic engagement.” And it is at this intersection that all the many faces of Marc Bamuthi Joseph—poet/performer/teacher/mentor/writer/curator—converge. On July 18, he will return to Chicago, teaming up with visual artist Theaster Gates for a community-based event in Cumberland Park which is the beginning of his newest piece, “Red, Black, Green: A Blues.” And while this weekend Joseph will be the center of attention onstage with “the break/s,” his deepest passion lies in engagement with the community at large as direct participants in his work, not just spectators. “As much as I do myself [as an artist],” he says, “I’m looking to, in some ways, take myself out of the equation, and [focus on] community first.”

Valerie, It’s great to see the educator and community leader side of Bamuthi recognized and, properly, given its place in relationship to his creative practice. More evidence of the creativity and critical thought he inspires in the youth he works with can be seen at http://breaksbeyondtheballot.wordpress.com/, the blog accompanying a artist in community project developed with his collaborator eli jacobs fantauzzi.