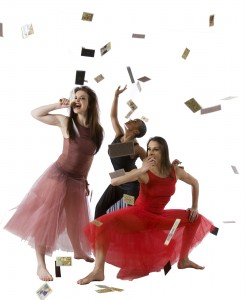 In an effort to give much-needed exposure to female choreographers, Artistic Director Eduardo Vilaro filled the Luna Negra Spring Program with pieces by four Latina choreographers. But don’t expect Saturday night at the Harris to be a politicized evening that mulls over ponderous gender issues; the three works I’ve seen (two in rehearsal) differ thematically and stylistically but have in common a raw, thrilling power. Expect an immensely pleasurable feast of passionate energy, performed by one of the most captivating companies in Chicago.

New York-based choreographer Nancy Turano addresses the subject of Latina femininity directly in her deconstruction of Carmen, the übersexual gypsy of Bizet’s famous opera. Turano divides Carmen’s personality into three figures: the sensual/sexual, the mystical/spiritual and the animal/id (Kirsten Shelton’s turn as the latter is worth the ticket price alone. On top of being a strong dancer, Shelton is a compelling actress; after she takes a bite out of a cigar and spits it across stage, crumbling the remnants in her outstretched fist, you squirm in your seat, suspecting you might be next).

“When I was working with Ballet Hispanico, it became important to me to dissect what makes the Latin female different from women elsewhere,” says Turano, a captivating presence herself. “This woman took control of her circumstances. Why is she the quintessential Latin female? Why is she so lasting?”

The piece is set to Bizet’s score—along with new compositions by Roland Marconi—entitled “Carmen Act I.” Act II, Turano tells me, follows the three Carmens to Dante’s Hell, where each is relegated to the appropriate circle of punishment, and the familiar score becomes distorted and grotesque. It sounds like delicious fun and we can only hope Turano is invited back to give us the second half.

Contrast this to the world premiere of Annabelle Lopez Ochoa’s “Nube Blanco”—an impressionistic, rhythmically thrilling blend of flamenco, hip-hop and contemporary movement. A Belgian-born francophone, Ochoa came to her Latin roots from the periphery; Spanish was the mysterious language of secrets and fights between her parents. The title of her piece means “white cloud,” loosely referring to her childhood bed from which she listened to the unintelligible sounds of her parents’ arguments. That said, Ochoa purposefully avoids narrative and, to best enjoy her creation, so should we. “Nube Blanco” unfolds in a series of short sections set to the gorgeous songs of Maria Dolores Pradera, separated by the sound of rain and distant industrial squeals and clangs. The disparate mood of the sections makes good use of the company’s versatility: the ensemble stomps and hollers and claps with aggressive sexuality, like rival gangs; a darkly humorous male quartet shuffles, squeaks and counts in several languages, chugging across stage like a train; a trio of partners sweeps through horizontal and vertical space in a precise and gorgeous geometry.

Also on the program is Michelle Manzanales’ “Sugar in the Raw,” described in the release as an exploration of “the complexities and subtleties of identity.” I can think of no two better adjectives for this insightful work. When I saw it first staged in 2007, the compassion driving each movement almost brought me to tears. I haven’t yet seen Maray Gutierrez’s “Eterno Despertar,” but a piece on longing and hope set to Portuguese fado seems well-placed in this program. (Sharon Hoyer)