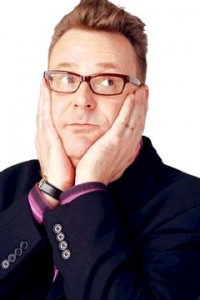 Remember that “Whose Line is it Anyway?” show? That British improv import hosted by Drew Carey that virtually always ended with Wayne Brady flailing around for cheap laughs? Well, as I recall, there were some pretty decent sketches once in a while, and most involved comic journeyman Greg Proops, whose unrelenting sarcasm and brash attitude constantly shattered the fourth wall. As a stand-up, Proops has a social/political bent; he timidly identifies himself as a San Franciscan with liberal leanings, willing to poke fun at hippies and stoners and derisively slam conservatives and fundamentalists. Delivery-wise, Proops uses gesture-ridden flamboyance to rip into what ails him, occasionally unleashing Dennis Miller-esque ramblings, like this bit on steroids in baseball: “There are a lot of fat white people who say, ‘rahr, Barry Bonds was a cheater, I like the old days.’ Oh yeah, the old days were great, where giant, obese, overfed, underpaid, mustachioed walruses clogged up the base paths like a pork rind in Dick Cheney’s arteries, yeah those were glorious days.” (Andy Seifert)