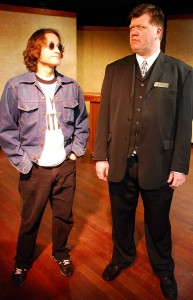 I never knew there was such a thing as BeatleFest, but if the modest pleasures of a movie can spawn Lebowski Fest, then surely the Beatles merit their own event and Scott OKen’s “Mop Top Festival” (at Factory Theater) is a gentle invitation into world of fan worship.

Most Factory shows are about subcultures: the Chicago theater scene, strip clubs, Renaissance Fair freaks.  The company’s current show is probably closest in tone to 2005’s “Lonesome Hoboes,” an amiable riff on Bob Dylan acolytes that spoofed their devotion while also explicating the various reasons why a certain musician might have a stranglehold on a person’s outlook on life.  Yes, it’s an obsession.  But it’s music, man.

OKen has been responsible for some of Factory’s more outrageous shows—huge casts performing in style that is loud, messy, ridiculous, exhausting and hilarious all at once.  His current effort (which he also directs) is comparatively mellow, though bursting at the seams in mostly the wrong ways.  The show has potential but needs major trims and a clearer focus.

An oddball group has arrived at the annual Mop Top Fest, spouting their Beatles trivia between tokes off the doobie and shots of Maker’s Mark.   Everybody knows everybody.  They have history.  There’s something about these types of friendships—forged over short, intense periods, linked by a shared passion—that OKen captures with a light touch.  The problem is, he doesn’t give us enough of the fest itself.  There’s a brief but amusing scene with a snobby-nerdy record vendor (Scott Pasko), and you get a flavor for what it must be like to be surrounded by people who can spout Beatles minutia like it’s their Social Security number.  Good stuff.

But the script is so overwritten—with extraneous scenes and jokes and dialogue—that the show’s better moments are frequently elbowed aside.  And then there’s the issue of music: there’s just not enough of it.

Beatles covers are played during scene changes, and boy, I’d like to get my hands on “The Chipmunks Sing the Beatles.”  But you lose sight of the very unifying force that brought these people together.  Only late in the game does the cast sing, and it’s a pretty terrific version of “Sexy Sadie” with the ghost of John Lennon on keys (Edward Fraim, looking awfully close to Lennon, circa the New York years).

The supporting players here find unusual ways into their roles: Shannon O’Neill does outstanding double-duty as a twisted hotel desk clerk, as well as a zoned-out stoner prone to staring at walls.  She’s the funniest thing in the show—truly, insanely funny.  And it’s all her—every weird line reading, the flight-attendant hand gestures—it’s perfect.  Paul Metreyeon finds odd humor in the guy who puts his head on the shoulders of girls, and executes a nice transformation into a pleasantly wasted state.  He’s the loser you want at every party.  Too bad the party is such a bust.  (Nina Metz)