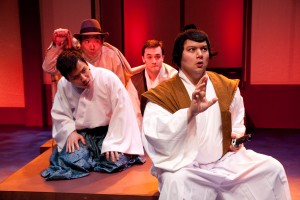 When Stephen Sondheim’s “Pacific Overtures” first appeared on Broadway back in 1976, few knew quite what to make of it.  World War II was as close to the show opening as we are now to the American Bicentennial Celebration that the piece was in part written to commemorate.  The story of the Westernization of isolationist Japan told from the Japanese perspective as imagined by white guys, the show began with Japanese-born film star Mako as “the Reciter” taking a samurai position and screaming at the audience and acting as narrator and commentator on kabuki-style staging with an all Asian-American cast singing Western-style show tunes.  The brainchild of producer Hal Prince, the show began as a straight drama but along the way, Prince thought that music could help the viability of the work, and Sondheim became involved.  Well, at least Broadway portrayals of Asians in musicals had come a long way since “Flower Drum Song.”

Following on the extraordinary success that Porchlight Musical Theatre has had in staging Sondheim musicals—ten productions in the company’s thirteen year history—it was only a matter of time before “Pacific Overtures” would get a staging, but how to make the work different from past productions?  One way was to hire an all-Asian-American cast, the first such staging attempted in Chicago.  Director L. Walter Stearns and music director Eugene Dizon took a much-publicized trip to Japan for research, but Japan is far too ancient and complex a culture to fully master on a vacation.  Far more important than the ancestry of the performers is how traditional Japanese performer movements, attire and mannerisms are presented on stage, and this remained a distracting problem throughout the evening.  Performers who flipped fans would drop them, swordsman fumbled weapons, kimonos had paisley and striped patterns and were made from decidedly Western materials and had obis that were not properly tied in the back.  Dime-store wigs slipped around on performers’ heads and wound up in odd places.  It is hard to be convinced that you are experiencing an alien culture when that culture appears almost as alien to many of the performers.  Equally distracting is the sparse orchestration employed that eliminated key interweaving melodic lines and timbres that are essential elements to Sondheim’s evocative score, not helped by the fact that the conductor and ensemble are above and behind the performers, which leaves much of the singing—often virtually a cappella because what is sung is juxtaposed rather than duplicated in the orchestration—tentative in finding proper pitch and rhythm.

The original work ignored World War II completely, much to the chagrin of Mako, who felt that the devastation of Hiroshima and Nagasaki should be dealt with, but then, fairness would dictate that Pearl Harbor should also be included.  It all became too much controversy and baggage and, at the time, these events were too recent to portray without audiences really taking strong offense.  Stearns’ production addresses this in the audio of a single atomic bomb blast that is heard interrupting the eleven o’clock number “Next” with the cast suddenly lying face down, but the moment comes across as a trivialization of an event that left humanity indelibly altered.

The recommendation here is mixed: on the one hand, “Pacific Overtures” is so rarely done and has enough to offer as a work that this production is worth catching.  On the other hand, in addition to the caveats mentioned, performances are often stiff and unenergetic, elements that may merely indicate an under-rehearsed show that needs some performances under its belt to achieve proper momentum.  (Dennis Polkow)