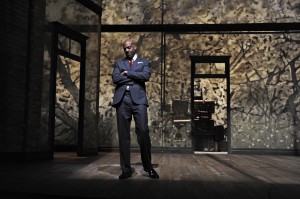 What might it be like if August Wilson took a stab at “The Cherry Orchard?”  That is more or less the milieu of the world premiere of Regina Taylor’s “Magnolia” which seeks to give deeper resonance to the divide of black and white that had long been implicit in Atlanta, but became explicit in 1963 by civil rights gains that so threatened the status quo of segregation that a wall was temporarily constructed across the city a la the Berlin Wall, built only three years earlier by the Soviets.  The play gets off to a slow start, alternating as it does between the worlds of black and white, each represented by a restaurant for each, as we get to know the diverse attitudes of both worlds, both having proponents that are pleased to see what they feel is an instinctive divide be made clear-cut.

That these worlds will ultimately collide and be transformed is a foregone conclusion, as well as that this will somehow come about in a Chekovian takeover of an estate from one side to the other involving trees (in this case the Magnolia tree) but along the way, plenty of soul-searching moments are summed up in heavy-handed monologues that don’t ring true to the actual fabric of genuine character dialogue.  But then, such was often the case for August Wilson as he was finding his voice.

What does uniquely hold our attention, though, is the eloquent expression of how much those on both sides, whether the old African-American butler who has seen it all, the white guitar-strumming liberal hippie-in-progress (1963 was too early for the real thing, especially in Atlanta), the black businessman or the spoiled white racist woman are all far too unwilling to see beyond themselves, which is a truth of life that is rarely mined in plays that focus on race relations: would those who are not in power really act much differently if they were in control?  The breath of fresh air in that regard is the character of Carlotta (Roxanne Reese), who like the playwright herself, is an African-American actress and is able to use her aesthetic sensibility to see beyond color.  Her summation of white and black men?  “At the end of the day, they’re all dogs.”

Another refreshing aspect of this play is how well its emotional care is revealed in a tight ensemble, a quality not often found at Goodman where actors tend to be left more to their own self-propelled energy.  No doubt this is due to Anna D. Shapiro’s direction, and her fingerprints are all over the action of the play.  This is Shapiro’s first new work since winning the Best Director Tony last year for “August: Osage County” and her work here and concurrently over at Lookingglass are a reminder of how deeply she can pull truth out of actors, Chicago style.  (Dennis Polkow)