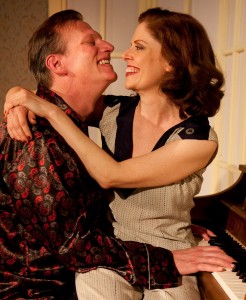 While “romantic comedy” may conjure up cinematic images of Julia Roberts in a bathtub or Meg Ryan in a deli, it’s important to remember that before there were chick flicks, there was English playwright Noel Coward.

His play “Private Lives” centers on divorced couple Elyot (Don Bender) and Amanda (Cameron Feagin), violently passionate ex-lovers who call it quits three years into their tumultuous marriage. But some cosmic force wants these two back together, as they’ve ended up in adjacent hotel rooms while honeymooning with their new spouses. Elyot is now married to the annoyingly girlish Sybil (Maggie Kettering) and Amanda to the dully-chivalrous Victor (George Seegebrecht), but upon seeing each other again they realize the divorce was a horrible mistake and agree to ditch their newly minted spouses. But once the romantic adrenalin wears off, the two are back to their signature bickering—the honeymoon phase, as it turns out, never lasts long.

It seems redundant to praise the text itself—after all, playwright Noel Coward is a canonical dramatist, and “Private Lives” has often been called the finest English comedy after “The Importance of Being Earnest” since its opening in 1930 (which starred Coward himself, Gertrude Lawrence and Laurence Olivier).

But veteran director Terry McCabe skillfully shapes Noel Coward’s classic comedy for a modern audience, bringing out strong (and often funny) performances from the entire ensemble. Feagin and Bender however are the real draw—the two longtime Chicago actors really seem like they’re having a blast in their volatile relationship (even if some of their fight choreography is a little shaky). And though the script is nearing its eightieth birthday, City Lit’s production doesn’t feel at all dusty: enduring truisms like jealously, regret and logic-crushing lust keep the play current as ever. (Whitney Rose)