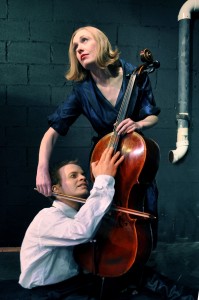 A few years ago in the New York Times, critic-at-large Margo Jefferson published a smart essay about the difficulties of appreciating the avant-garde.  In it she wrote that while an encounter with this kind of theater was rarely “love at first sight,” audiences needed “to learn to love—or at least understand—being provoked and disoriented.”

I can think of few other theater companies in Chicago, large or small, who consistently provoke me (as a critic) and disorient me (as an audience member) like Trap Door Theatre, a small company artistically helmed by the indomitable Beata Pilch.  And whenever I lament being unable to afford a trip to Scotland for their annual Edinburgh Theatre Festival, I remember that challenging fringelike fare is as close as my backdoor courtesy of Trap Door.

Challenging and fringelike—as well as provoking and disorienting—are just a few adjectives to describe Trap Door’s latest offering, “Horses at the Window,” by exiled Romanian playwright Matei Visniec.  The piece is a triptych of sorts, with three similarly structured scenes as microcosms for three centuries of war (1699; 1745; 1815) and each showcasing a woman losing a male loved one to battle and the ensuing flood of complex emotions (love, loss, alienation, fear) that result.  It’s a robust piece of zany theater that has been directed with flirtatious aplomb by Romanian Guest Director Radu-Alexandru Nica, who has expertly exploited his actors’ bottomless reserves of energy, suppleness and breath control (let’s just say, you wouldn’t want to challenge these folks to a game of Twister). Not surprisingly then, the tension throughout the evening isn’t so much dramatic as it is physical.  Furniture with actors shakily balanced on top threatens to break in half.  One moment a leather belt is on an actor’s waist and the next it is securely snapped onto another’s wrist.  A woman performs a balletic dance with a can of air freshener to classical music and fills the air with a dense mist that threatens to suffocate first-row patrons.   All three vignettes establish clear relationships and tug-of-war power struggles, but only the third one—featuring tour de force performances by Trap Door company members Holly Thomas and John Kahara—comes closest to conveying some emotional stakes.  But since it’s the final movement of the evening, it sends the audience home with a sense of payback.

Nonetheless, it’s the visual circuses that hold an audience through this piece of sometimes verbal incomprehension, a specialty from the same author responsible for 1999’s “The History of Pandas told by a Saxophonist with a Girlfriend in Frankfurt,” whose title should be a finalist for any Superfluous Play Title award.  (The winner of that award would most likely be Scottish playwright David Greig’s “The Cosmonaut’s Last Message to the Woman He Once Loved in the Former Soviet Union.”)  But I digress.  Just like “Horses at the Window” does so many times throughout the evening—psychologically at least—yet always balancing that fine line between spectacle and substance, realism and abstraction.

Romanian actor and director Ion Caramitru, who worked at the legendary Bulandara Theatre in Bucharest under the oppressive censorship and dictatorship of Ceaucescu, once described the Romanian theater aesthetic, and I was reminded of this thanks to Trap Door.  “Romania has always been in the middle of the most barbarous wars.  There has always been a balance between fighting and comedy in our culture and so the two masks of theater belong to our life.”  Case in point:  “Horses at the Window.”  And depending upon your familiarity with the avant-garde, maybe it will be “love at first sight.” (Fabrizio O. Almeida)