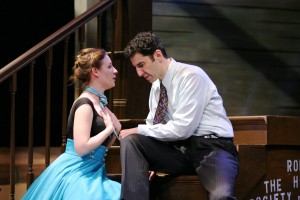 It’s always great to see an area theater get the first post-Broadway rights to a show, and in the case of “Curtains,” Drury Lane Oakbrook is deservedly presenting the first regional theater staging of the work less than nine months after it closed on Broadway last June.  Of course, the fact that the show went straight to regional theaters rather than have a big, splashy national tour with its star David Hyde Pierce—who won the Tony Award last year for Best Actor in the show—and has even already been licensed for college and high school performances so soon, might tell us something.

Like “Robbin’ Hood!  A New Musical of the Old West,” the show-within-a-show that “Curtains” satirizes, this is a show that never seems to quite get off the ground.  The fact that this is the umpteenth Broadway show to satirize the making of a show within an actual show since “The Producers” doesn’t help: there are such better examples of this genre out there.  For starters, “Robbin’ Hood!” is not credible even as a bad musical with good or even bad intentions; you have to buy that the show-within-a-show could actually pass for, well, a show, and said show has to be bad enough yet clever enough as a show and yet somewhat still reflect the qualities of a Broadway musical.  Likewise, the characters in the show who are supposedly Broadway musical personnel have to reflect some awareness of the form they are satirizing.

The idea of a Broadway-musical-loving detective coming backstage during the creation of a musical to solve the murder of the talentless leading lady but who insists that “the show must go on” nonetheless, has plenty of potential, to be sure, but little of it is realized here because the character itself knows virtually nothing about the form.  This is the role that Pierce had, here gamely taken by Sean Fortunato, who asks Aaron Foxx (James Rank), the supposed composer of “Robbin’ Hood!” such basic questions as, do lyrics or music come first?  The response forms a song far better than the stuff that the composer supposedly writes professionally.  The detective keeps criticizing aspects of the production, but the criticisms are vacuous: “That song is lackluster: it lacks, uh, luster.”  Not funny, not even accurate: luster is about the only element that the pseudo-song “In the Same Boat” that is being criticized, actually has.

Compare this, for instance, with the guy in his living room who puts on an old record of the fictional musical “The Drowsy Chaperone,” in the musical of the same name, where everything the guy does and says genuinely reveals someone who actually lives and breathes musical theater.  There is no such reality in “Curtains,” and the comedy, such as it is, has to resort to vaudeville one-liners and toilet humor as a result.  When a character is suspended dead from the theater rafters, his wife quips after constant sitcom references to his lack of sexual prowess, “That’s the first time that my husband has ever been accused of being well-hung.”  The show director brags that when he performed in “A Midsummer Night’s Dream,” his Bottom was well received.  When the talentless leading lady is murdered onstage during the opening-night curtain calls and some of her fellow cast members are incredulously asked to help carry her out, one responds, “Why not?  We’ve been carrying her all night.”  Granted, this is supposed to be 1959, but these jokes would have been on life support even back then.

My own interest in catching this show was that it contains some of the final collaborations of John Kander and Fred Ebb, the longtime successful songwriting team that brought us “Cabaret” and “Chicago,” among others, but the score not only doesn’t reach the level of those shows, these songs don’t even measure up to their lesser shows such as “Kiss of the Spider Woman” or “Steel Pier.”  In fairness, though, lyricist Ebb did pass away back in 2004 while the team was still working on this show, as did book writer Peter Brook the year before.  And there are some fine songs, including the love ballad “A Tough Act to Follow,” but the romance in the show switches gears so bizarrely and suddenly and the characters are so superficial that we never really care about them.  And there are other worthwhile songs, although always outside of the show-within-a-show concept, that cleverly satirize how quickly actors can go from hating to loving critics depending on review content in “What Kind of Man,” and the show business song “Show People,” that each stand nicely on their own, but again, seem out of place within the fabric of the show.

God knows, director William Brown, making his Drury Lane Oakbrook directorial debut and his very game cast, give “Curtains” everything that they have, for sure.  But the whole thing comes across as a badly written “Columbo” satire on “Saturday Night Live” that goes on and on for what feels like a very long two and a half hours.  (Dennis Polkow)