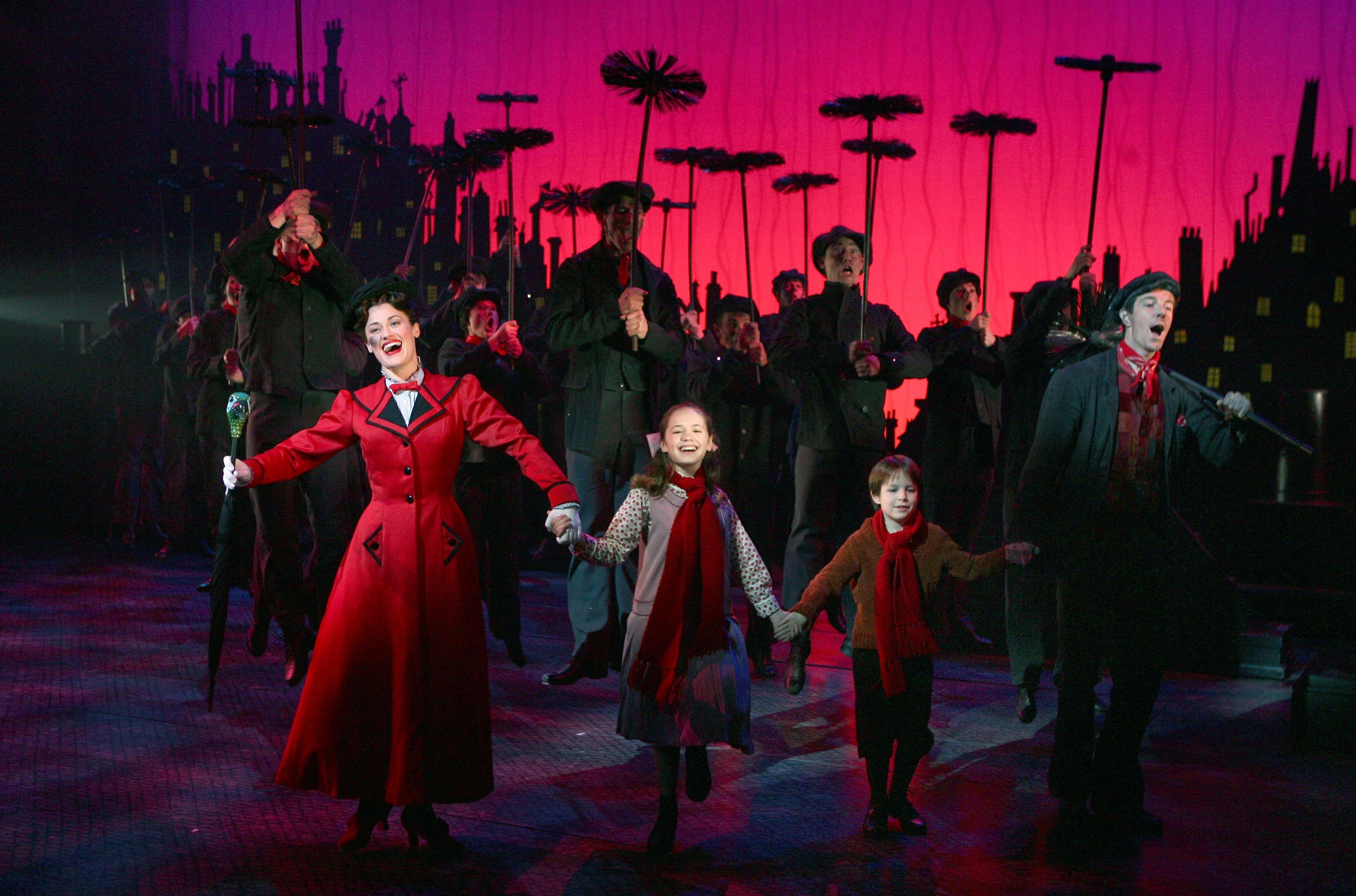 With the economy going to hell in a handbasket, how could any of us resist a show that suggests that, rather than invest your money, you might as well throw it to the birds and go fly a kite?  What could be interpreted as subversive back when the 1964 Disney movie first came out sounds like virtually sage advice today.  It’s worth noting that when British author P. L. Travers wrote the first of her “Mary Poppins” books back in 1934, the Great Depression was going on across both sides of the pond.

The stage production of “Mary Poppins,” the national tour of which just opened in Chicago, is a curiously potent mix of Travers plus Disney meets Cameron Mackintosh.  That may sound like a cacophonic concoction, and yet somehow, it all adds up to something more than the sum of its parts. Mackintosh, the same producer who brought us such mega-hits as “Cats,” “Les Miserables,” “Phantom of the Opera” and “Miss Saigon,” among others, had tried to bring “Mary Poppins” to the stage since well before his heyday, but like Walt Disney himself, Mackintosh ran into the stumbling block of having to convince Travers that he could do full justice to her character.  It didn’t help that Travers reportedly ended up despising the Disney film adaptation while nonetheless having enormously profited from it by shrewdly having held out for a percentage of it.

Travers wanted a new score, but Mackintosh wisely realized that the double Academy Award-winning music (Best Score, Best Song for “Chim Chim Cher-ee”) of the Sherman Brothers that had become an indelible part of the Poppins mythos were an essential element to include, assuming that a partnership could somehow be reached with the Disney company which, at that point, had not even formed its own theatrical unit.  Mackintosh’s legendary persistence ended up spanning a quarter of a century (Travers had meanwhile sold Mackintosh the stage rights but then died in 1996) and the cautious interest that evolved into eventual cooperation of Disney in the person of show co-producer Thomas Schumacher.   As a result, not only does the play include several of the film’s most beloved songs—in many cases sung better and with stronger arrangements and voices than the movie, wonderful as it was, and often at reshuffled points in the story—but songwriters George Stiles and Anthony Drewe were brought in to incorporate the Sherman Brothers songs and score as the backdrop for a much broader, virtually through-composed musical work complete with new songs the overall effect of which verges on operetta, with plenty of arias, ensemble numbers and recitative sections complete with recurring Wagnerian leitmotivs that really bring the story quite convincingly to life.  This is really a “singspiel” (sung story), an enchanted fairy tale opera in the tradition of Mozart’s “The Magic Flute” and Humperdinck’s “Hansel and Gretel” more than a mere musical.  Yes, there is spoken dialogue, but even that is almost always underscored.  And new songs bring clarity to the narrative and sometimes, even nightmares, such as the disturbing “Playing the Game” surreally performed by the children’s own toys come to life to lecture them on taking out frustrations on inanimate objects.  Yikes.

The role of dance is also greatly expanded, and choreographer Matthew Bourne not only transforms the familiar Disney dances—the movie cartoon sequence, for instance, becomes a ballet between eerie park statues come to life that interact with the characters rather than those corny animated penguins—but virtually every adventure outside of the Banks home is thoroughly danced, and what spectacular and breathtaking dances they are, made all the more so by the stunning costumes, storybook sets and stage tableaus that often are genuinely art-worthy.  This is a rethinking of “Poppins” as aesthetic and topnotch as when Disney let Julie Taymor rethink “The Lion King.”  And while the film’s zany and hilarious gravity-defying tea party with Uncle Albert is not included in this adaptation, Mrs. Banks is no longer a suffragette and Admiral Boom has a relatively minor role, characters featured in the Travers original that Disney excluded are here, including the evil nanny Miss Andrew (Ellen Harvey) who was once Mr. Bank’s caretaker and responsible for many of his hang-ups, and who here also comes to bully the Banks children after Mary Poppins initially departs.

And if it’s gravity-defying action that you crave, there is plenty of that here: yes, Mary Poppins flies, to be sure, and not just in a single scene as Elphaba in “Wicked” did.  Remember, this is Cameron Mackintosh, the guy who began the trend of huge stage effects, for better or worse, by bringing us falling chandeliers and landing helicopters, and he knew he had to top himself, and top himself, he does.  Mary is airborne during no less than in three climactic scenes that are brilliantly timed for maximum dramatic effect, and one departure astonishingly continues on above the heads of audience members all the way up into the balcony and the theater rafters.  The effect is truly magical, made all the more impressive by Ashley Brown, who created the  role of Mary on Broadway, making it all look like an everyday and natural occurrence, which for Mary Poppins, it is, of course.  Another no less spectacular effect comes during the “Step in Time” dance of the chimney sweepers where Bert—played by Gavin Lee, a superb singer and dancer who created the role in London and on Broadway—starts a tap dance that continues vertically on up the side of the stage’s proscenium.  Lee continues dancing right up the stage-left edge as intently and convincingly as he had on the ground, reaching the top and then actually tap-dancing upside-down up across the ceiling a la Fred Astaire in “Royal Wedding” without ever breaking a smile and without missing a beat, before repeating the effect in reverse across and then back down stage-right all the way back to the floor.  I don’t what kind of hazard pay these stars are receiving and what kind of insurance is in place, but whatever it is, it’s not enough.  And these are just highlights of the wonders to be experienced and savored during what is a surprisingly and refreshingly enchanting family show that, like the wondrous nanny herself, really does turn out to be practically perfect in every way.  (Dennis Polkow)