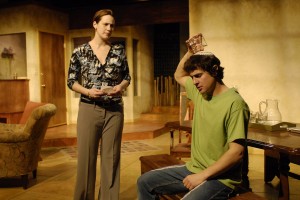 Israeli-born playwright Motti Lerner’s “Pangs of the Messiah,” at Silk Road Theatre Project, focuses on a religious Zionist family living in a West Bank settlement in 2012.  When a peace treaty between Israel and the Palestinians is finally reached, the members of this Jewish family must choose between fighting for their home and abandoning it.  This dilemma reminded me of David Hare’s “Via Dolorosa” (1998), which more than any other article or book on the Israeli/Palestinian conflict for me crystallized a lot of the questions at the heart of the problem.  In that piece Hare asked:  what matters more, “stones or ideas”?  And what defines a person, “where they live or what they think”?  Lerner’s drama, whose uneasy family dynamics, bickering and subsequent clash of varied views is no less than Israel’s political, personal and emotional history writ small, goes one step further to ask:  If you are a true Jew, and place your humanism over your politics, are you betraying your country?  Your family?  Your faith?

Like the best playwrights, Lerner doesn’t want to provide answers to questions he knows have no easy answers.  He’s just content in asking them through dialogue that is honest, intelligent and oftentimes searing and theatrical.  (The piece has been translated from the Hebrew into English but luckily the rhythmic and poetic dynamics of Lerner’s style has not been lost.)  To this end, he’s been aided by a fantastic design team.  And so a beautiful living-room setting straight out of the pages of Better Homes and Gardens captures the feeling of close-knit family ties, but smart props (scattered children’s toys) and persnickety costume details (white sneakers stained with blotches of blood) hint at the family tensions simmering underneath (a couple unable to conceive is a prominent subplot), as well as the violence lurking outside.  Meanwhile, CNN documentary newsreels and a foreboding original score imbue this fictionalized fable with a spectacular sense of eerie realism.  On opening night, the second act’s relentless drive and taut pace was unfortunately missing from the first half, but no doubt director Jennifer Green’s production will find it during its run.  And while the strong ensemble does well with Lerner’s characters, some of whom are saddled with heavy political and cultural symbolism, actors Dana Black, Stacie Green and Brent T. Barnes are especially adept at suggesting people who might exist outside of this issue-driven theatrical vacuum.  They’re also the most comfortable balancing the play’s tricky tone—”Pangs of the Messiah” is curiously pitched somewhere between political thriller and family melodrama.

And yet whatever its dramatic shortcoming,s “Pangs of the Messiah” is not only a good play by a strong international writer, it’s also an experience that’s good for us as Americans right now.  After all, it can’t be mere coincidence that “Pangs of the Messiah” is currently one of two Chicago theatrical offerings (The other is Theatre Mir’s “The Arab-Israeli Cookbook” at the Chicago Cultural Center) born out of the Israeli/Palestinian conflict, a global issue that has largely been met with apathy in America.

After all how, as secular Americans, could we ever hope to understand a people whose faith could mean the difference between life and death?  How, given our emotional insularity and solipsism, could we identify with citizens whose greater concern for the state of their nation trumps any personal suffering or sacrifice?  These are difficult concepts for the Westerner, but maybe this recession has placed us in a better position to once again entertain the questions.  Perhaps, as we begin to adopt a shared fate mentality towards our nation, as we learn to keep it together in a time of great uncertainty, we may be able to finally wrap our hearts and minds around the issues raised in plays such as “Pangs of the Messiah.” (Fabrizio O. Almeida)