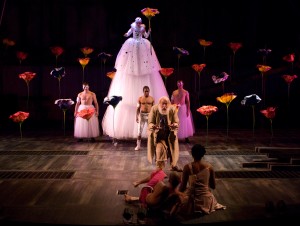 Frank Galati (center) and the cast of Steppenwolf Theatre Company’s production of The Tempest/Photo: Michael Brosilow

No.  Shakespeare. Ever.  Despite Steppenwolf being the oldest ensemble theater in Chicago, there has curiously been no Shakespeare performed by the company across its nearly thirty-five-year existence.  Until now, that is, with the staging of the Bard’s last play, “The Tempest.”  Why the long drought in the first place, and why end it now?

“Ever since I’ve been in the ensemble,” says Tina Landau, Steppenwolf ensemble member since 1997, who is directing “The Tempest” and is upstairs during a company dinner break two hours before the first preview of the show, “many ensemble members have been longing to do Shakespeare.  Five years ago, I pitched ‘The Tempest’ as one of three plays that I most wanted to do and through a confluence of the right timing and the right season—particularly with this year’s overall theme of the imagination—it finally all came together.”

Why the reluctance and the hesitation?  “I don’t want to speak for Martha [Lavey, Steppenwolf artistic director],” says Landau, “but I think there was a sense that there was already a theater in town that did Shakespeare splendidly [Chicago Shakespeare Theater], so why should we do what they are already doing?  But it more and more became, ‘That’s silly:  not only one theater in town can do Tennessee Williams, Chekhov and Sam Shepard.’ ”

And the timing might well have been earlier, as Frank Galati, Steppenwolf ensemble member since 1986 and two-time Tony Award-winning director who is returning to his acting roots and playing Prospero in “The Tempest,” points out:  “Eleven years ago, just before Martha became artistic director, I was interested in doing ‘As You Like It,’ and we even had set designs, but for all kinds of reasons having to do with timing and availability of ensemble members, it didn’t happen.”  Galati’s startling new look of long white hair and bushy beard is somewhat distracting as he continues—”Hey, I’ve been on an island for twelve years!”  “Yeah, no barbers,” says Landau.  “Doesn’t he look great?” “But,” Galati continues, “we’ve also never done Molière, the Greeks—there’s plenty of world literature, drama and comedy that we’ve never done: Restoration theater, Pirandello, even Ionesco.  We’re doing Beckett for the first time next year.  There’s always such an abundance of opportunities and stories to tell.”

Landau has only directed a single Shakespeare play, “A Midsummer Night’s Dream,” which gave her the Bard bug after avoiding doing it for years, largely she says, because “I had been exposed to so much deadly Shakespeare that I wasn’t turned on.  I loved reading Shakespeare but had not thought much about how to bring the material to life.  Once I got my feet wet, I was hooked.”  Galati, too, has only directed a single Shakespeare work, “The Winter’s Tale” at Goodman Theatre back in 1990, but has done “lots of study and reading” and has “intense interest,” and says that he played several Shakespeare roles as a young actor, and recalls “even taking on the role of Falstaff in the ‘Henry’ plays, although I was 19 at the time.”

“So, Frank, you never told me,” says Landau, taking over the interview in the spirit of a true director,  “How did it happen that you were contacted to play Prospero, and what was your initial reaction?”  Galati has a deep, almost Santa-like belly laugh, augmenting his new look: “Martha called and asked me if I would consider it,” he says, as Landau sighs in wonderment.  Long pause.  “It was a staggering question,” Galati intones in a very quiet, deliberate and deep voice, “and I had to take some time to think about the implications.  But I came to, ‘Yes, if Tina will have me, absolutely.’  And it’s a blast, a thrill, this invitation to play and to screw up and to go very, very deep.  It’s wonderful to be in the flow of the act itself.  It’s a trip.  The thrill of being in the middle of this world and of working with this text is extraordinary.”  “And it’s an advantage for me,” says Landau, “that as a fellow director, we can talk directing as Prospero might see direction.”  Is concentrating on bringing a single character to life, however significant, a difficult adjustment for Galati, who is more used to directing at this stage of his career?  “Oddly,” he reflects, “no.  But then, ever since I was a kid and all through high school and college and then as an actor all over town at Forum, Candlelight, Victory Gardens, Court and Body Politic, I have performed, so it’s always been part of who I am.”  “It has never felt anything other than natural to have Frank in this role,” says Landau.  “Besides,” she jokes, “he gives me notes every night!” 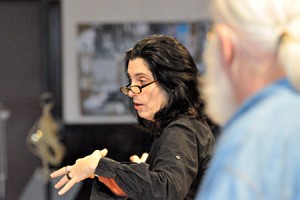 A significant help in the latter part of the rehearsal process, according to Landau, has been the presence of verse and text coach Rob Clare from England’s Royal Shakespeare Company, who has been at Steppenwolf for the past four weeks working with the cast.  “Some of the ensemble members had taken workshops with Ron in New York over the years and found his approach very useful, so we invited him over,” says Landau.  “His approach is to have everyone crack open the text and to find a way to own the language and personalize it in a way that feels natural and organic.  There is a fierce commitment to the truth in this production and everything is honest, exposed and raw, which is exactly what I had hoped.”  Will there be British accents?  “I hope not!” Landau and Galati exclaim in virtual unison.

The traditional interpretation of Prospero representing Shakespeare at the end of his career in this, his final work and putting down his pen for good, i.e., Prospero giving up his sorcerer’s powers at the play’s end, is one that both Landau and Galati have moved well beyond.  “How much can we really know any of that, anyway?” says Galati.  “But as the play opens itself up and discloses itself, it’s really about those individual moments of reflection on the imminent approach of death for all of us mortal souls, no matter how old we are.”  “When I first started,” admits Landau, “I really thought that this was a play about making art, which is great.  But there is so much more here.  I always knew that this was a great play, but I didn’t expect it to be such an endless container of wisdom.  This man [Prospero] changes during the course of the play.  He begins the play hurt, abused and wanting revenge, and creates a tempest to gather his enemies together.  But he loves his daughter and is wrestling with his own hurt and need and he finally discovers that he not only must forgive, he must give up control.  So, ultimately, it’s a play about acceptance, of surrender.”