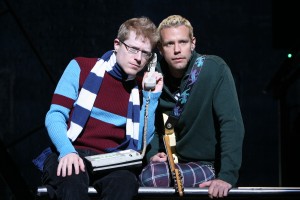 Even though “Rent” finally came due on Broadway last September after an extraordinary twelve-year run, national tours of the show of various talent levels continue to do brisk business across the country.  The end of the New York run, however, afforded the unique opportunity to create a topnotch, standard-bearing tour incarnation called “Rent: The Broadway Tour” by employing cast members fresh from the Broadway production as well as original cast members, who were willing to tour with the show in the roles that they had originated back in 1996.  Both Pascal (Roger) and Rapp (Mark) created their roles off-Broadway and maintained them through the show’s initial huge Broadway success and reprised them in London and in the movie version, although Joliet native Rapp also starred for a time in the initial Chicago run, wrote a book about the “Rent” phenomenon and actually made his professional acting debut downtown as a child extra in “Evita.”  The chemistry between these two performers was a factor in the show’s initial success, even though both are now in their late thirties, i.e., nearly twice the age of their characters at this point.  But unlike, say, elderly opera stars decades older than the young, impoverished artists that they are portraying routinely appearing in Puccini’s “La bohème,” the work that “Rent” is based on, Pascal and Rapp both look much the same as they did back when the show first opened, still sing and act superbly and move with extraordinary energy and are able to convincingly blend in with their much younger colleagues.  But there are other performance gems here no less significant, including the stratospheric vocalizing of Gwen Stewart, the original Broadway soloist on the show’s signature anthem, “Seasons of Love,” and Michael McElroy’s portrayal of Tom Collins, who gives extraordinary pathos and poignancy to the funeral scene of his lover Angel (Justin Johnston), a scene that literally stops the show.

“Rent” has touched down several times since its initial run here, often with non-equity casts and/or making use of “American Idol” contest winners, but even at its very best during that first area run when there was still considerable attention to professionalism and detail, it has never been quite like this.  Area “Rentheads” will have an entirely new experience of a show that they only thought that they knew, and if you’re one of those who never got around to seeing “Rent” and have wondered what all of the fuss is about, don’t squander this brief, rare and perhaps final opportunity to directly participate in the fullest possible experience of the show’s life-affirming message of making the most of the “now.”  The fragility of life is demonstrated not only by these struggling artists coping day by day with loss and AIDS, but in the stranger-than-fiction case of the show’s 36-year old composer Jonathan Larson suddenly dropping dead of a burst aortic aneurism on the night before “Rent” was to open and his wildest dreams would at long last finally be realized.  “Rent” both in fiction and reality continues to remind us to cherish each other as fully as we can, as long as we can, as we really cannot count on anything beyond that.  (Dennis Polkow)