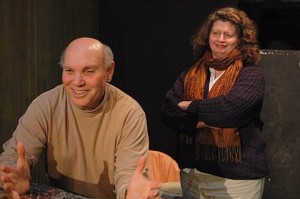 Lynne McMahon, whose poems have appeared everywhere from The New Yorker to The Paris Review to Rolling Stone, and who has been the recipient of awards and grants from the Guggenheim Foundation and The American Academy of Arts and Letters, has teamed up with The Side Project Theatre Company for the first full production of her new play “Bird Sanctuary.” Adam Webster of The Side Project describes falling in love with the way that Lynne’s dialogue worked on the page: “I saw the monologues and direct addresses physically dovetailing into each other, and then splintering apart, reassembling in dialogue, and then fraying again. I was fascinated and intrigued as to how she was able to physicalize that, and I wanted to do the same.” I talked with McMahon just before the opening of “Bird Sanctuary” about her foray into dramatic writing.

I’ve read your poetry for a long time and think of you primarily as a poet, and I was going to ask whether this was your first play, but then I read that you’ve actually written four plays in the last few years, both one-act and full-length.

Have you been writing plays along with your collections of poetry, then, for some time, or has this been a recent development in your career?

It’s been fairly recent, actually. Just after I put out my last book of poems (in 2004), I started exploring playwriting, and since then I’ve actually been most engaged in writing plays. (Laughs) It’s the compulsion of the moment.

How did your interest in dramatic writing come about? Has it been an evolutionary progression, or can you pinpoint a moment that you felt drawn toward it?

Well, I think that poetry and plays are actually quite close as genres, now that I think about it. Poets are extremely good at verbal compression, and that economy turns out to translate well to the stage. And with plays you get the exciting chance to have more than one point of view, and of course if you’re interested in voice, which poets always are, it’s very gratifying… I get to have, for example, the most bitchy, the most depressing, the strangest voices operating on the same stage. That chance to expand is thrilling… So it feels like a natural development.

I was reading a synopsis of the play and saw that it concerns, among other issues, coming to terms with cancer, which made me think about the poems of yours that express a concern about reading bodies as texts, and in particular, your poem in which the speaker argues with a doctor about how to interpret the symptoms of disease. Is that kind of anxiety, arguments about the semiotics of failing bodies, present in “Bird Sanctuary”?

I’m delighted you made that connection! I’d say the play shares the—not jauntiness—but similar way of deflecting terror about bodies with forms of acerbic wit.

I’m also wondering about how hard it is to work with a theater company collaboratively, as compared to the relatively autonomous process of submitting a poem to an editor.

Yes, there’s absolutely no collaboration in poetry, and so I thought working with a theater company would be difficult. In fact it was just the opposite—I felt such a sense of relief to have other minds working on the same object, and making the piece feel like it was taking on its own life.

How did you end up working with The Side Project in particular?

Pure good luck. I sent in the play to be read sight unseen, but it wasn’t until my husband and I moved to Chicago and started seeing dozens of plays that I realized how much I loved the intimacy of the black-box theater, which can’t be duplicated in my experience.

I know what you mean. I love the intensity of intimacy in those spaces, and the way that you’re not allowed to distance yourself as you can with the tendency towards spectacle of larger theaters.

Exactly, it actually reminds me of reading a poem in that it mimics the space of the page and the pure intimacy of reading, with nothing placed between the audience and the experience.

You’ve become something of what others might call a “formalist” recently, and you’ve talked about that tendency yourself vis a vis your interest in rhyme. Does that concern with form and poetics come out in the play? Or to put it in a somewhat stupider way, does the play rhyme, for example?

Oh no. I’m more interested in getting to a natural vernacular, lifted up a notch of course…. As far as “Bird Sanctuary,” there’s no rhyme in the dialogue itself, but there might be a different kind of “rhyming” at a structural level. For example, a couple in the play have a tradition of walking a loop in the bird sanctuary together, and that kind of circularity comes up again in the narrative. So structurally, I think there is maybe a gesture toward rhyme in a different way.